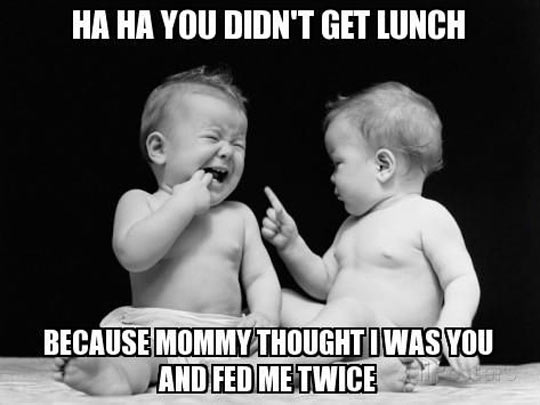 A couple of Fridays ago I was blessed with twin sons by the Almighty. There is no doubt that it was a life changing moment and one that I and my wife had been waiting for.

Here is an account of some of the funny stuff that my wife and I have experienced as parents of twins.

What Treatment Did You Get To Conceive Twins?

Be it the staff at the hospital or family friends, everyone wanted to know what medical treatment did we get to conceive twins!

Also Read: Things Only Girls Living In A Hostel Can Relate To!

Obviously embarrassed, we endlessly explained – and are still explaining – that we seeked NO medical treatment to conceive twins! I mean how does this question even make any sense?!

Since my wife and I have always been the smart types (i.e. physically fit for most part of our lives) a few people told us that we didn’t look “healthy enough” to be expecting twins.

Also Read: 3 Types of Employees that are a Supervisor’s Nightmare

We took such comments as a compliments…what choice did we have?

No matter how good a hospital once the twins arrive the staff will ask you for, “double mithai”.

Frankly, I expected that. But still there came a point when people’s “double mithai” expectations made me feel like a halwai!

Come On They are Only Twins!

So I was taking my newborns to the nursery when a couple of onlookers in the hospital began to scream frantically, “Look twins! Look twins!”

Even though as a parent you understand other people’s excitement but still, I mean like come on! We birthed a pair of human twins, not dolphins – what’s all the screaming about?

Either Go Mad or Let Go of the OCD

Just in case you suffer from a slight case of Obsessive Compulsive Disorder (OCD) the way I do, here is a simple advice. Either go mad or go with the flow and ignore your OCD.

You see, be it the last few days before your children arrive or the next few months following their arrival, there is nothing that you can control. There is no way your perfect plans will synchronize with a couple of babies. Whatever rituals you follow will have to rest the moment you struggle to change the diapers of two wailing newborns for the first time!

Which One is He?

Even though it has been over a week; each time a baby cries we look at him carefully, to figure out which one is he. Deep down we hope that someday we don’t embarrass ourselves in public!

Will the Elder Twin Be Bossy?

I do wonder if someday my elder son will demand reverence from my younger son because he’s a minute older? Do you think that’s a possibility? Now I-

Oh! Well, since the younger one is up and demanding his feed, I must leave that thought for another time. Wish me luck!