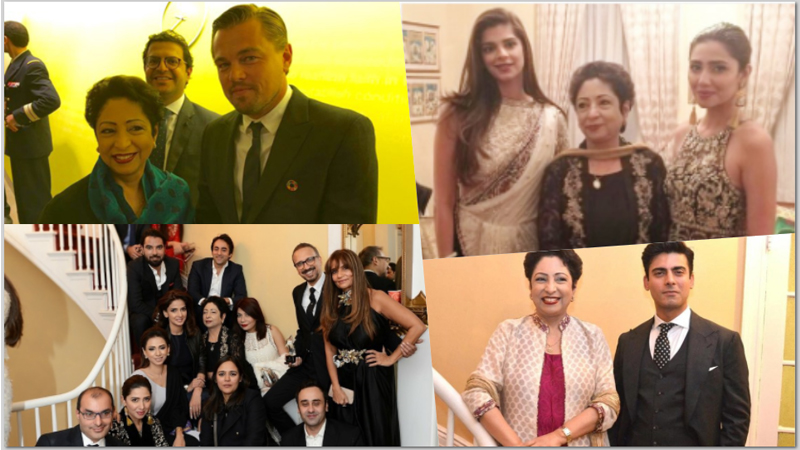 If you don’t know Maleeha Lodhi, you’re probably living under a rock. Famous for her poised demeanor, eloquence and exceptional diplomatic skills, Maleeha Lodhi has to be the most happening ambassador of Pakistan to the United Nations. Why do we say so? Here’s why!

Read: Have You Seen Sonam Kapoor and Mahira Khan Hugging Each Other At Cannes?

Unlike previous office holders, Ms. Lodhi is not only active on Twitter but she is also more interactive than her contemporaries on the microblogging website. Catching up with colleagues, celebrities and replying to people tweeting at her, Maleeha Lodhi does it all! Isn’t it cool?! See for yourself!

Read: We’re Loving the Way Pakistanis Came Out in Support of Mahira Khan

If you follow Ms. Lodhi on Twitter then one thing you can’t go without discussing are those numerous grand gatherings she attends and the diverse guests’ list she hosts almost every other day.

Young aspiring women, new representatives joining UN, renowned fellow countrymen or UN Secretary General, she has struck a pose with them all!

Read: Madeeha Gauhar Is No More: Pakistan Mourns The Loss Of Yet Another Brave Daughter

Congratulations to the honorees at WFPG's 11th Annual Celebration of Women Diplomats in NYC where we celebrated the the 41 women ambassadors to the UN, 42 DPRs and 28 consuls general in NYC! View photos: https://t.co/pHhdX5mdve pic.twitter.com/TfoL4rveVX

Always a pleasure to see and learn from Dr Shamshad Akhter. At my dinner in her honour last night pic.twitter.com/VjzUPswzeD

It was a pleasure to meet and chat to the women members of the US War College delegation who came to the Mission this morning pic.twitter.com/9HnajlInZL

3. Named Among The World’s Five Most Successful Women Diplomats!

Earlier this year a popular Russian news website named, “Gazeta.ru,” enlisted Maleeha Lodhi as one of the world’s most influential women diplomats. In Gazeta.ru’s words, Maleeha is hailed as “One of the most famous female figures in the Muslim world,” who has the experience of serving as Pakistan’s ambassador to the United States twice. Bringing immense pride to the nation, Ms. Lodhi has indeed proven her mettle worldwide, reason why she enjoys such popularity both inside and outside the country.

4. She Will Give You Wardrobe Goals!

Among all these things, her style statement is another area which never ceases to impress. Bright colored printed scarves with cardigans in the shades of black render elegance to her looks. However, for me it’s the way she carries herself that makes her an epitome of sheer grace. No wonder her attire will give you wardrobe goals!

Read: Malala Yousafzai Is In Pakistan And We Seriously Can’t Stay Calm!

Maleeha Lodhi deserves all the accolades for not just laying the foundation of cultural diplomacy in the case of Pakistan but also taking it to a whole different level by organizing landmark events. One such example is Lahore Literary Festival, which marked its third year in New York a few days ago.

On Saturday in NY pic.twitter.com/rTe0hwTu6A

Cutting the cake at our Pakistan Day reception in New York along with fellow Ambassadors to the UN pic.twitter.com/15CrR2SbaY

Moreover, she always uses her platform to motivate and celebrate the young talent of Pakistan!

Some of our standees displayed at the UN during the session of CSW in addition to our photo exhibition featuring women who have made a mark in Pakistan and beyond pic.twitter.com/etSfPFsmyA

While Maleeha Lodhi continues to inspire and bring pride to the nation, we hope that young aspiring diplomats and politicians follow in her footsteps to improve the country’s image in the international arena.

Read: 3 Muslim Allies In The Western Media You Should Know About