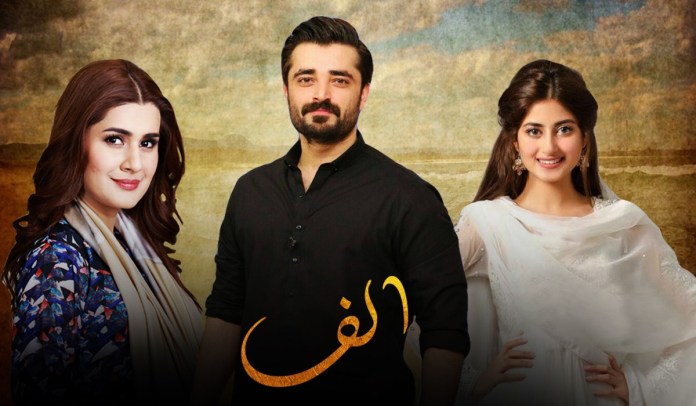 Alif, written by Umera Ahmed is an upcoming drama that touches the subject of spirituality.

“Alif touches upon the questions you ask yourself; questions about life and what it means. The lives of all the characters are connected with this single alphabet, Alif.‘

Alif is based on a novel of the same name. According to its author, “Alif has 8 chapters, which is a journey of four characters. Each chapter is build up on letters of a character named “Husn-e-Jahan,” played by Kubra Khan.

The drama is directed by Haseeb Hasan, with a stellar cast including Hamza Ali Abbasi, Sajal Aly, Ahsan Khan and Kubra Khan. It is produced by Sana Shahnawaz and Samina Humayun Saeed.

The main character Qalb e Momin, played by Hamza Ali Abbasi is a self obsessed filmmaker. However, it looks like we will be seeing his character’s transformation as he finds out the true meaning of life.

Momina, the female lead played by Sajal Aly, is an aspiring actor who struggles to make both ends meet and save the life of her ailing younger brother.

Alif’s OST is sung by Shuja Haider and Momina Mustehsan. It is Momina’s first OST.

Read: “Durj” By Shamoon Abbasi Gets Banned For Portraying Cannibalism