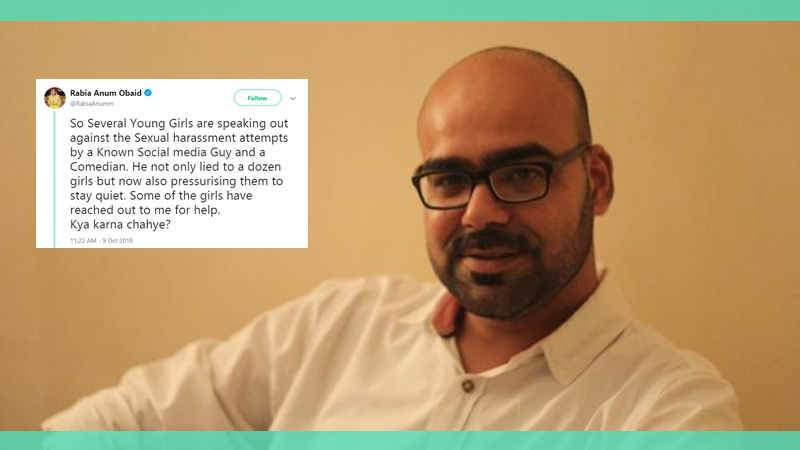 Unless you’re living under a rock, you must be aware of all the shocking names that have come forward since last week as a result of India’s #MeToo moment. With each passing hour, we see tweets outing men we least expected to show predatory behavior. Nana Patekar, Vikas Bahl, Chetan Bhagat, Alok Nath, Kailash Kher, Gursimran Khamba, Tanmay Bhat and the list goes on!

Read: Bollywood’s #MeToo Moment: From Nana Patekar To Kailash Kher, All The Big Names That Have Been Called Out Since Tanushree Dutta’s Brave Stand

Quite contrary to this, the #MeToo movement in Pakistan was shot down immediately when a superstar like Ali Zafar was called out by his female colleague, Meesha Shafi. What seemed like a moment of reckoning in prospect suffered a silent death before it could strip bare more perpetrators.

However, a tweet last night peaked my hopes that India’s #MeToo moment may have a spillover effect in Pakistan. This time, a Pakistani Youtuber Junaid Akram was under fire!

What did junaid akram do

Overwhelmed by the revelation, I did what any person with internet access would do to confirm the news: search for a substantial tweet or news article that provided proof against the accused.

Here’s what I came across!

So glad that Junaid Akram’s problematic af ass is going down. About fucking time!

Multiple women cake forward sharing their stories of him sexually harassing him and then later on threatening them. It’s picked up by Rabia Anum the Geo Anchor and Dawn Images Editor Hamna Zubair

Zoob here, saw it coming and we’re still not sure why!

Someone out Junaid Akram pls. Pretty sure he messages a lot of girls and is an A-grade fuckboy.

I headed to the account of Geo News anchor, Rabia Anum, that almost everyone described as their primary source regarding the allegations being leveled against Junaid Akram.

Her thread left me disturbed and anxious!

So Several Young Girls are speaking out against the Sexual harassment attempts by a Known Social media Guy and a Comedian. He not only lied to a dozen girls but now also pressurising them to stay quiet. Some of the girls have reached out to me for help.
Kya karna chahye?

Adding to this. Almost every girl has proofs against him but they are too scared to go public because “Log Kya kahengay”

While Rabia’s thread spoke about “…a known social media guy…” there was no mention of Junaid Akram specifically.

Not one to sleep without sating my curiosity, I continued stalking the who’s of who of Twitter and every credible handle had only one name to take: Junaid Akram.

And then, there was no holding back!

Last time I spoke up against Junaid Akram on Twitter based on a friend’s experience, women were on the verge of burning me alive while trying to defend him. Toxic toxic toxic https://t.co/7l2ZEedCgG

Never liked Junaid Akram and have never found him funny. Always wondered why do people even consider working with him and inviting him to different events. Glad he is finally being exposed for the pervert that he is.

Why are people surprised kay Junaid Akram 'allegedly' harassed girls? Lol he is a pakistani guy who got famous very quickly, what were people expecting? Not even remotely surprised about the allegations lodged against him but this dumbfound nation amazes me yet again.

Does it ever boil your blood when you see people destroy the character of women who come forward with their sexual harassment stories but these famous men (Junaid Akram etc) are exposed time and again and nothing concrete ever happens and life goes on normally for them?

Opinionless Spirit sounded quite opinionated for a Twitter handle like that. However, the absence of screenshots has created confusion, all over!

And even though so many people are naming and shaming Junaid Akram, we are yet to discover a first-hand testimony from a survivor.

So, it made sense for us and so many others to have this reaction after going through the tirade of tweets against the Ganji Swag comedian! 👇

Can anyone update me with #JunaidAkram saga? Never actually followed the guy but he’s quite famous, and everyone should know the truth.
P.s once really loved his initiative of bringing free books from Dubai. But nothing can cover up for harassment/molestation.

What’s up with Junaid Akram now?

Right now, lack of proof or screenshot of a testimony from a primary source is making the whole episode sound like conjecture. We must get to the bottom of the story to know if Junaid Akram is being framed or if there is any substance to the chatter on Twitter. In case the latter presumption is true, the culprit must be brought to justice!

If you have anything to add to this story, please reach out to Team Bolo Jawan on [email protected]

Team Bolo Jawan respects your RIGHT to remain anonymous, should you choose to step forward.