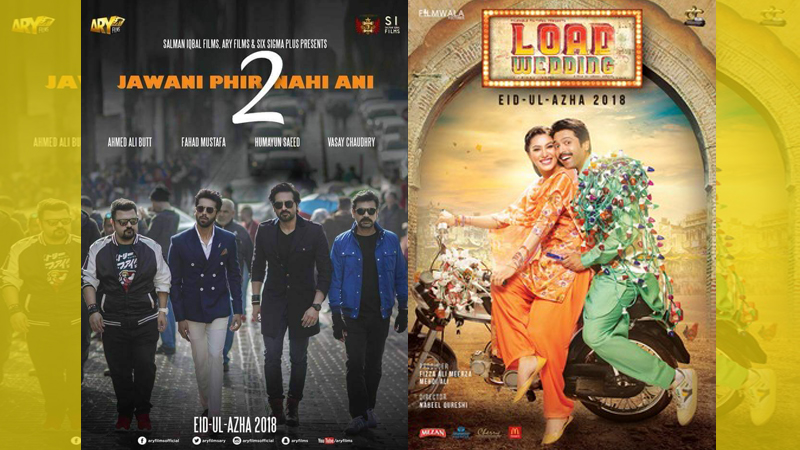 Slated for release this Eid-ul-Azha, the trailer of Jawani Phir Nahi Ani 2 (JPNA 2) and the teaser of Load Wedding hit our screens back to back this week and seems like the Fahad Mustafa fans are in for a treat. If you haven’t done it already, here, let’s have a look at their trailers so that you can decide, Jawani Phir Nahi Ani 2 or Load Wedding, which one will you be buying the tickets for?

Selfies of the ensemble cast of JPNA 2 from behind the scenes had us all excited for the movie even before the teaser was revealed. The sequel had been in the making for long and now that the trailer has been released, it seems like all the wait was worth it!

Read: 3 Reasons Why The Trailer Of Motorcycle Girl Has Us All Excited!

While a Pakistani boy fighting for the love of an Indian girl does make for a cliched story line, it’s the comic projection of it that kept us hooked throughout the 3 minutes. Here, have a look at it!

We almost could not recognize Fahad Mustafa when his first look for Load Wedding appeared on the internet. However, the teaser has taken our expectations a notch higher.

A production of Filmwala Pictures and Geo Films and a Nabeel Qureshi directorial, Load Wedding has  Fahad Mustafa, Qayyum Ansari and Mehwish Hayat in the lead roles. The rom-com highlights the hurdles a common man has to face in order to get married in a South Asian society.

The folksy music, bright and colorful scenes, traditional attires, wedding shenanigans and the accompanying drama make this one minute teaser a hell of an entertaining roller coaster! Brownie points go to the editor for successfully tingling the viewers’ curiosity, leaving us craving for the trailer.

Watch the teaser below to know what we’re talking about!

Now that you have watched both, tell us which one are you excited for the most? Jawani Phir Nahi Ani 2 Or Load Wedding because we can clearly not decide!

Read: We Saw 7 Din Mohabbat In & Our Verdict Is Not Pleasant