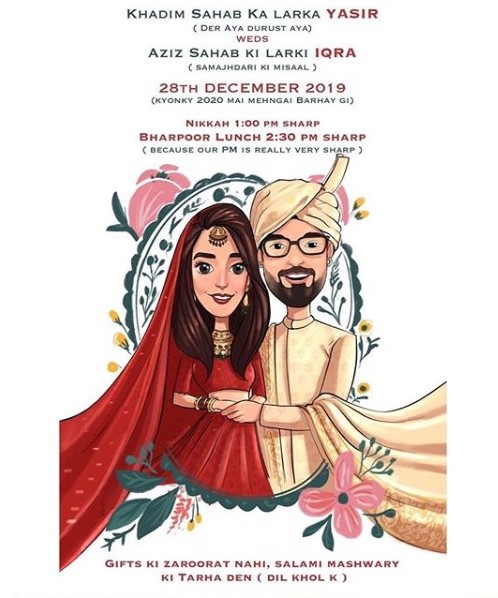 After months of speculation Iqra Aziz and Yasir Hussain have finally given Pakistan a date for their wedding.

The two stars had sent their fans into a frenzy earlier this year when Hussain had proposed Aziz in front of the cameras at the Lux Style Awards.

Ever since, conjecture was rife regarding the power couple’s wedding date. While many had speculated about a December wedding, it was impossible to get a confirmation from the duo.

Read: From Fans To Ghairat Brigade, Everyone Has Something To Say About Iqra Aziz & Yasir Hussain’s Engagement

However, Iqra Aziz and Yasir Hussain have finally made their wedding card public and GOD(!) it’s witty!

Read: Eman Suleman Announces Her Wedding In A Not So Hamza Abbasi Way & Pakistanis Are Amused!

As per the card – which is laden with hilarious quips – the two will tie the knot on 28th December (kyonky 2020 mein mehangai barhay gi!)

The nikkah ceremony will take place at 1:00 PM sharp in just about ten days and the guests have been discouraged from giving gifts and encouraged to give huge salamis!

Here’s wishing the young duo a lifetime of khushiyaan!