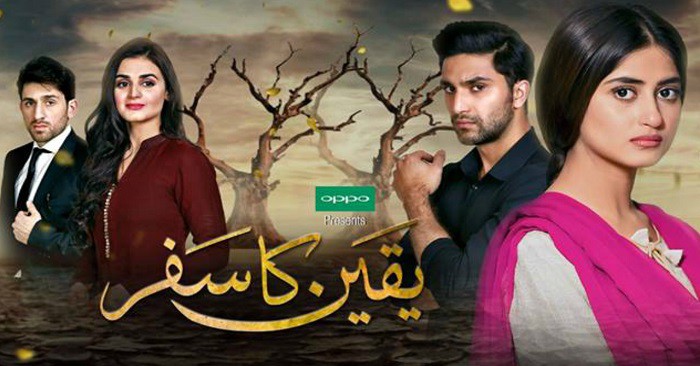 The on-going year saw a number of Pakistani dramas that were well-received by the Pakistani audience. Here is a look at top 5 Pakistani drama serials that made headlines in 2017.

Sammi received tremendous attention during the year particularly, for raising awareness on issues such as Vanni and gender discrimination against women.

Released in April 2017, Yaqeen ka Safar turned out to be one of the most popular dramas of the year. Starring in lead roles, Ahad Raza Mir and Sajal Ali received a lot of appreciation for their work. In many ways the serial allowed for the two to reach new heights of fame.

Baghi presents a biographical account of the deceased social media celebrity, Qandeel Baloch. Staring Saba Qamar in the lead role the drama serial was released in July 2017. It soon became one of the most viewed shows on Youtube in Pakistan.

Directed by Farooq Rind and produced by Nina Kashif, this serial is likely to go beyond 2017 and end sometime in early 2018.

Highlighting double standards of a patriarchal Pakistani society, O Rangreza made headlines time and again during 2017. Most of the fanfare was owing to the wonderful performances that were put in by Nauman Ejaz, Sajal Ali, Sana Nawaz, Irsa Ghazal and Bilal Abbass Khan.

The drama serial was released in July 2017 and is yet another Kashif Nisar venture that is likely to end in 2018.

Released in November, 2017, Dar Si Jati Hai Sila is a Momina Duraid production. It has been written by Bee Gul and directed by Kashif Nisar.

The story of the serial raises curtains on the issue of sexual and mental harassment by trust-worthy family members. Starring Yumna Zaidi, Nauman Ejaz, Saleem Sheikh, Sakina Samo, Saman Ansari and Noor-ul-Hassan in prominent roles the project is likely to end sometime in 2018. It has been very well-received by both the critics and the audience this far.