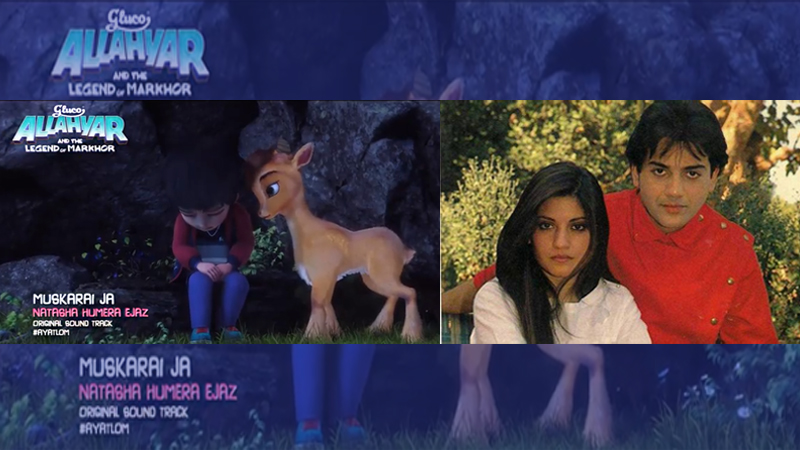 Less than a month away from release, promotions of Allahyar and the Legend of Markhor (AYATLOM) are at its peak; following which Muskuraye Ja, first OST of the animated feature film, was revealed yesterday.

Also Read: The Pakistani Venture | Episode 2 | Allahyar And The Legend Of Markhor Part 1

When I read the caption saying Muskuraye Ja, I was expecting anything but a remake of the Zohaib Hassan Muskuraye Ja. However, on hearing the signature rhythmic hook of the famous number right at the beginning of the song, I knew I was in for a big surprise.

Also Watch: The Pakistani Venture | Episode 2 | Allahyar And The Legend Of Markhor | Part 2

Video of the song is set against the backdrop in which we can see Mehru the Markhor singing to cheer up Allahyar who seems gloomy for some reason with Hero the Chakor and Himalayan Monals, native birds of Pakistan, dancing to the beats of the song.

Sung by the voice actor herself,  Natasha Humera Ejaz has done complete justice to the song by keeping the spirit of original track alive along with just the right amount of apposite modification. The appealing musical motif at the kick off catches the ear of the listener and keeps them hooked throughout. Like always the case with AYATLOM, what I love the most about the song is the fusion of folksy Rebab riffs and typical animation music in order to amplify the feel besides ensuring cultural relevance.

Also Watch: The Pakistani Venture | Episode 2 | Allahyar And The Legend Of Markhor | Part 3

Considering the fact that renditions of hit numbers are usually under intense scrutiny to be as good, remaking one of Zohaib Hassan’s classics Muskuraye Ja is both a clever and a gutsy idea which AYATLOM’s team executed quite successfully. The song immediately evokes nostalgia and takes you down the memory lane where we can picture Kumar Gaurav, lead actor of 1982 Indian film Star in which Muskuraye Ja and other songs of the second album of Hassan duo were first featured, singing and dancing on a beach with Zohaib Hassan’s unique vocals in the background.

Also Read: Meet The Crew – Allahyar And The Legend Of Markhor

Needless to say that Muskuraye Ja of Allahyar and the Legend of Markhor has indeed raised the expectations of all those who have been waiting for a quality Pakistani animated feature film for long now. The audience is looking forward to AYATLOM’S music and the film itself with great excitement. Here’s hoping that the film sets new benchmark for country’s animation industry and puts Pakistani talent on the map!

Also Read: This Awe-Inspiring Teaser of an Upcoming Pakistani Animated Feature Film Allahyar and the Legend of Markhor has Got Everyone Excited

Till then, enjoy these two minutes of sheer delight and bravura by clicking the link below: