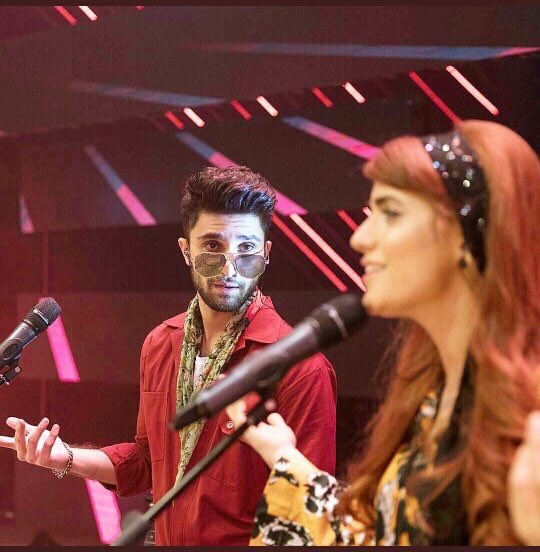 There is no denying that Ahad Raza Mir is the most sought out actor on television. His outings with co-star Sajal Ali have been widely appreciated and going by the feedback of his fans, he is certainly the heartthrob drama audiences were looking for after Fawad Khan moved on.

Read: Coke Studio Announces Its Eleventh Season With A Bang(!) But Some Pakistanis Are Unhappy

However, all the love in the world could not save him last evening from making a complete fool out of himself on the country’s most prestigious music show, a.k.a Coke Studio.

Ahad, who was paired with Momina Mustehsan was slated to sing the evergreen, Ko Ko Korina on the show. Both because Mir currently enjoys a larger-than-life fan following and because Ko Ko Korina is among the most beloved songs to have come out of the golden days of Pakistani cinema, fans were literally holding their breath in anticipation!

Read: We Need To Talk About How Transfixing Is Chand Tara Orchestra’s Nami Danam!

However, once the song came out, Ahad Raza Mir’s big singing debut made him the subject of jokes so savage that it would have been criminal not to immortalize them in a compilation.

What do you do when you've had a crush on Ahad Raza Mir, and then he sings like that on #CokeStudio11

…But not everyone was so polite…

All the tone deaf Ahad and Momina fans who are like "tau tum ga ke dikha do" tau people tum log diapers mai ghoomre thay while we rocked this song countless times in countless shadis woh bhi on a frikkin dhol.. SIT YOUR TASHREEF DOWN! #kokokorina #CokeStudio11

And then came the jokes and the memes…

Ahad Raza Mir was not the only one facing brutal criticism from all corners. The joke-makers also found their way to Momina Mustehsan and the makers of Coke Studio…

The only singer missing now on the #CokeStudio11 is #tahirshah . He can sing better than #KoKoKorina

Ever you look at things and wonder how it got there???#kokokorina#CokeStudio11 pic.twitter.com/FgZKGEOenm

All of us listening to the trainwreck that's been #CokeStudio11 and remembering the good times under Rohail Hayat and even Strings. #CokeStudio pic.twitter.com/PXAmDlhOGU

As for us…we’re still at a complete loss of words after last evening’s train wreck that was Ahad Raza Mir and Momina Mustehsan’s performance…RIP Ko Ko Korina!