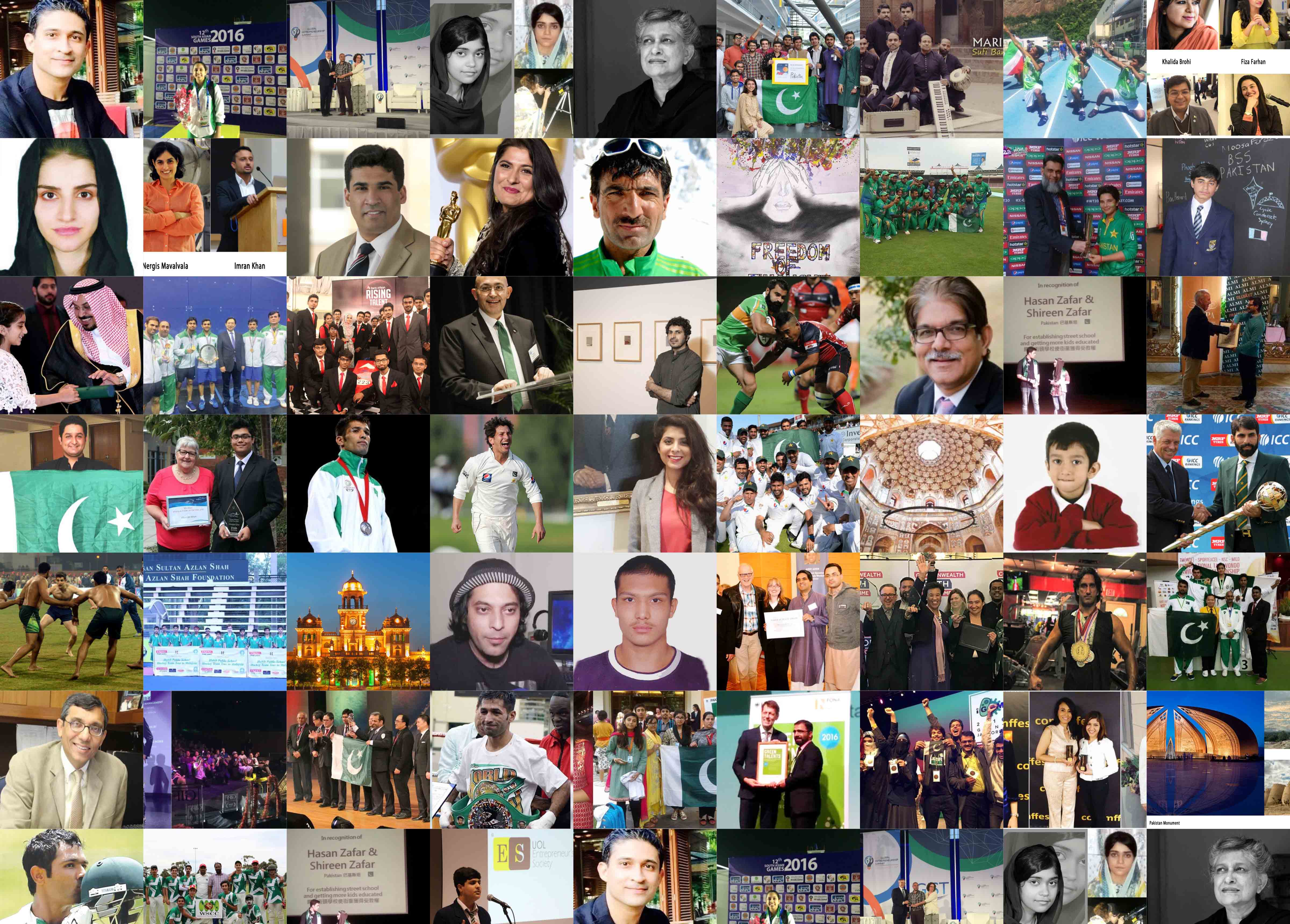 The year 2016 has been one of the most unpredictable years of the century. Along with taking away many great people from us, it also gave us several devastating moments that we might never forget. But saying that 2016 was a complete disaster would be incorrect, for it gave us many reasons to celebrate as well.

In fact 2016 proved to be a year when Pakistani talent was generously recognized by the world. Here is a round of the 60 moments that made our nation proud this year!

When Lahore University of Management Sciences (LUMS) alumni Haris Aziz was named among “AI’s 10 to Watch” by the IEEE Intelligent Systems magazine. ‘AI’s 10 to Watch’ celebrates “young stars” in the field of artificial intelligence (AI).

Pakistan’s Lianna Catherine Swan won Pakistan’s first gold of the South Asian Games in 2016. She swam her way to the victory in the women’s 200m breaststroke.

17-year old Norina Shah from Quetta became the world’s youngest astronomer this year. Norina Shah began to pursue her passion for astronomy by studying the world of stars when she was in class 8. Her tweets attracted international media immediately as a result of which she was interviewed by Eduzine Global magazine, a UK based magazine. She was recognized internationally when the UN Staff came across her interview.

Renowned Pakistani architect Yasmeen Lari won the prestigious Japanese Fukuoka Prize in the Arts and Culture category this year. After qawwali maestro Nusrat Fateh Ali Khan and social scientist Dr. Uxi Mufti, Lari is the third Pakistani recipient of the Fukuoka Prize. The Fukuoka prize was established in 1990 by Fukuoka City of Japan. These awards aim at recognizing and honoring the exceptional work of organizations, groups or individuals that promote and preserve diverse cultures of Asia.

Pakistan won the best international booth award on International Day at Technical University Munich. Students from more than 35 countries participated in the event. They presented different aspects of their local cultures. Pakistani booth stood out because of the posters depicting historical places, natural habitats and other important locations. The truck art drawn by a Pakistani student, Pakistani food and beverages were also highly appreciated by many visitors.

A Pakistani musician and singer Dr. Zafar Iqbal was awarded with Takrim (a prestigious award in Sufi singing) at Cairo, Eygpt, in an international Sufi music festival called ‘Sama International Festival of Spiritual Music and Chanting.’ This award has also been awarded to poet-philosopher Allama Iqbal in the past. Dr. Zafar Iqbal, who is a former in-charge of musicology department in National College of Arts, aims to promote peace through Sufi music.

A Pakistani girl named Sidratul Muntaha (alias Sidra Khan) was declared a worldwide topper to have competed among 180 countries of the world by a UK-based university. Sidra who resides in northwest Pakistan, got first position by scoring 100 per cent marks in the Management Accounting MA-1 paper in an online examination of the Association of Certified Chartered Accountants (ACCA). The online examination is conducted by local British Council officials.

11. Nergis Mavalvala and Imran Khan Part of the Team that Discovered Gravitational Waves

Pakistanis were genuinely proud when we got to know that two of our own scientists, Nergis Mavalvala and Imran Khan were part of the most significant scientific discoveries of the century i.e. the ground breaking discovery of gravitational waves, ripples in space and time hypothesized by physicist Albert Einstein.

13. Sharmeen Obaid Chinoy Did It Again!

Sharmeen Obaid Chinoy made history by becoming the only Pakistani to win two Oscar awards. Sharmeen was awarded the Oscar in the category Best Documentary – Short Subject for her documentary “A Girl in the River”. She was first awarded with Academy Award in 2012 for her documentary “Saving Face”.

14. Ali Sadpara Became the First Man to Make a Successful Winter Ascent on the Killer Mountain

Pakistani climber Ali Sadpara became one of three mountaineers in the world to make the first-ever successful winter ascent of “Killer Mountain” Nanga Parbat, which at 8,126 meters is Pakistan’s second highest mountain peak after K2 and the world’s ninth highest.

A 15 year-old Pakistani girl Eiza Abid won the global United Nations Human Rights Office poster competition for children. In the competition, contestants were asked to illustrate what freedom means to them. Students from seven countries participated in the competition.

When Anam Amin was included in ICC’s WT20 dream team as the 12th player in the women’s team of the tournament after bagging seven wickets in four World T20 matches.

A Pakistani student, Abu Hifs won gold medal by securing first position in international Mathematics competition held under University of South Wales Australia. Abu Hifs who hails from Sargodha out did students from 16 other countries in this competition.

Pakistan was introduced to its youngest social entrepreneur, nine-year-old Zymal Umar. She initiated a social project called Zee Bags under which she makes reusable bags using old newspapers, sells them and uses those earnings to buy essential items for underprivileged children belonging to SOS village. Zymal has been awarded the TIE, the youngest entrepreneurship award, a gold medal from the Federal Secretary of Education in Pakistan and has also received the Prince Abdul Aziz Award for Children Pioneer/Ecopreneur in Saudi Arabia.

20. Jehan Ara Got an Invite from the White House

Renowned Pakistani tech entrepreneur Jehan Ara received an invitation from the White House to speak at Stanford University for the Global Entrepreneurship Summit 2016 (GES). Jehan Ara who heads Pakistan Software Houses Association for IT and ITES ([email protected]), a trade body and a registered association, founded in 1992, has worked extensively to promote and develop the software and services industry in Pakistan.

Pakistan’s first Formula Electric car was unveiled! It was developed by a team of PNEC-NUST students and selected for participation in the Formula SAE Lincoln-2016 which is a leading American competition for undergraduates. 30 teams from six countries had qualified to take part in this competition this year. Pakistan’s Formula Electric Racing NUST (FERN) was the only team representing not only our country but the entire Asia.

A Pakistani entrepreneur Dr. Shahid Mahmud (CEO of a major ICT company in Pakistan) received ‘Distinguished Fellow Award 2016’ from Eisenhower Fellowships. These awards are held annually to recognize the significant contributions made by Eisenhower Fellows to their fields.

Pakistan was listed among the top ten rugby nations in world rugby and third in Asia by “Get into Rugby” program of World Rugby Organization.

Pakistani music producer Sharif Awan won a gold medal at the Global Music Awards (GMA) for his album “Indus Raag: Music Beyond Borders”. This album was produced under the initiative of Indus Raag project which aimed at archiving the legacy of sub-continental music tradition.

27. Muhammad Shahzad Makes It to Google Hall of Fame

Muhammad Shahzad, a 14-year-old security researcher from Pakistan, made it to the Google Hall of Fame for reporting several vulnerabilities in their web applications and also getting them fixed.

A Pakistani scholar Usman Haider was awarded with Sweden’s most prestigious invention and innovation award, the SKAPA Development Prize 2016 for inventing a device to help the elderly and persons with less mobility.

Attshan Ali Abbasi a 24-year-old Pakistani made a world record of becoming the fastest man to recite the names of all countries of Asia & Middle East in one breath.

30. Khurram Jahangir Honoured With Young Victorian of the Year 2016

A 20-year-old Pakistani Khurram Jahangir Khan was honoured with Australia’s highest ranking youth award Young Victorian of the Year 2016 for his volunteering work with migrant communities.

Pakistani leg spinner Yasir Shah was ranked at No. 1 spot in the ICC rankings for Test bowlers as a result of his performance in the first Test against England at Lord’s. He became the first leg spinner since Shane Warne in 2005 and the first Pakistan bowler since Mushtaq Ahmed in 1996 to be ranked No. 1.

A Pakistani girl named Maryam Atta Malik won Lincolns Inn’s Joan Denning Prize for topping the Bar Professional Training Course (BPTC) across the Commonwealth. The Joan Denning Prize is awarded to a student who obtains an ‘outstanding’ in BPTC.

Pakistan’s cricket team became No.1 Test Team in the World! The spot was short lived but we were over the moon while it lasted!

In the 17th century Mughal-era Shahi Hammam in Lahore received the Award of Merit in UNESCO Asia-Pacific Awards for Cultural Heritage Conservation 2016 in Bangkok.

A 7-year-old Pakistani boy Muhammad Humza Shahzad became the world’s youngest qualified computer programmer. However, this was not the first time that Humza had set any world record. Prior to this, he had set the record of becoming the youngest MS Office Specialist at the age of 6 in 2015.

The ICC Chief Executive David Richardson presented Misbah-ul-Haq, Pakistan’s Test captain with the Test mace at Gaddafi Stadium in Lahore after Pakistan had risen to No. 1 for the first time since the current Test rankings were introduced in 2003.

Pakistan’s beautiful city Peshawar and its project titled “City Beautification and Uplift Programme” was honored with Asian Townscape Award 2016. These awards are organized by UN-Habitat Regional Office for Asia and the Pacific in cooperation with Asian Habitat Society, Fukuoka Asian Urban Research Center, and Asia Townscape Design Society. The aim of these awards is to highlight and acknowledge the efforts of a developing city in making itself better and advanced.

Pakistani visual artist Faisal Shaukat was awarded with a gold medal in New York Film Festival for Star Wars Promo. He won the gold medal for his work by beating eight ace directors from all over the globe.

Pakistani activist Syed Muhammad Tahir made a name for his country in the international arena by winning Power of Peace Award 2016 in Australia. This award is given to those individuals who make diligent and sincere efforts to promote peace by making conscious efforts in order to enlighten the society locally and globally.

The trailer of Pakistan’s first hand drawn anime movie, “The Glassworker” was released. It is produced by Mano Animation Studios which is a brainchild of Usman Riaz and will be released in summer 2017. Here is the tailor of the movie.

When Pakistan’s five-member Taekwando squad won one gold, two silver and one bronze medal at the International Taekwondo Invitational Championship in Malaysia.

Pakistani scholar Professor Zulfiqar Bhutta was awarded with the prestigious “World Academy of Sciences prize (TWAS) 2016” in medical sciences for his incisive work on academic pediatrics and public health in Pakistan which has contributed to shape global child health and policy.

50. 3 Golds and 6 Silvers at the Asia Pacific ICT Alliance Awards

A Pakistani team of 12 biology students bagged a bronze medal in the iGEM World Championship Jamboree held in Boston. It was the first Pakistani team to attend the international genetically engineered machines competition that started in MIT 15 years ago.

Pakistani film maker Tanya Panjwani won ‘Making a Difference Award’ (MADA) at Global Community Film Festival in Toronto for her masterpiece documentary. The theme of her short film ‘Marvi: The Mystic Muse’ is the life of Sanam Marvi, a Pakistani Sufi singer.

Shireen and Hasan Zafar, siblings from Karachi who founded the Street School to help educate underprivileged children, were awarded with the Global Youth Award 2016 in Taiwan.

60. Ahmed and Muhmmad Afandi Covered the National Anthem on Sitar

On Pakistan Day, 8-year-old Ahmed with his brother Muhmmad Afandi miraculously covered the national anthem of Pakistan on sitar and showed the world that no matter what, the children of this nation “Shall Rise & Shine!”