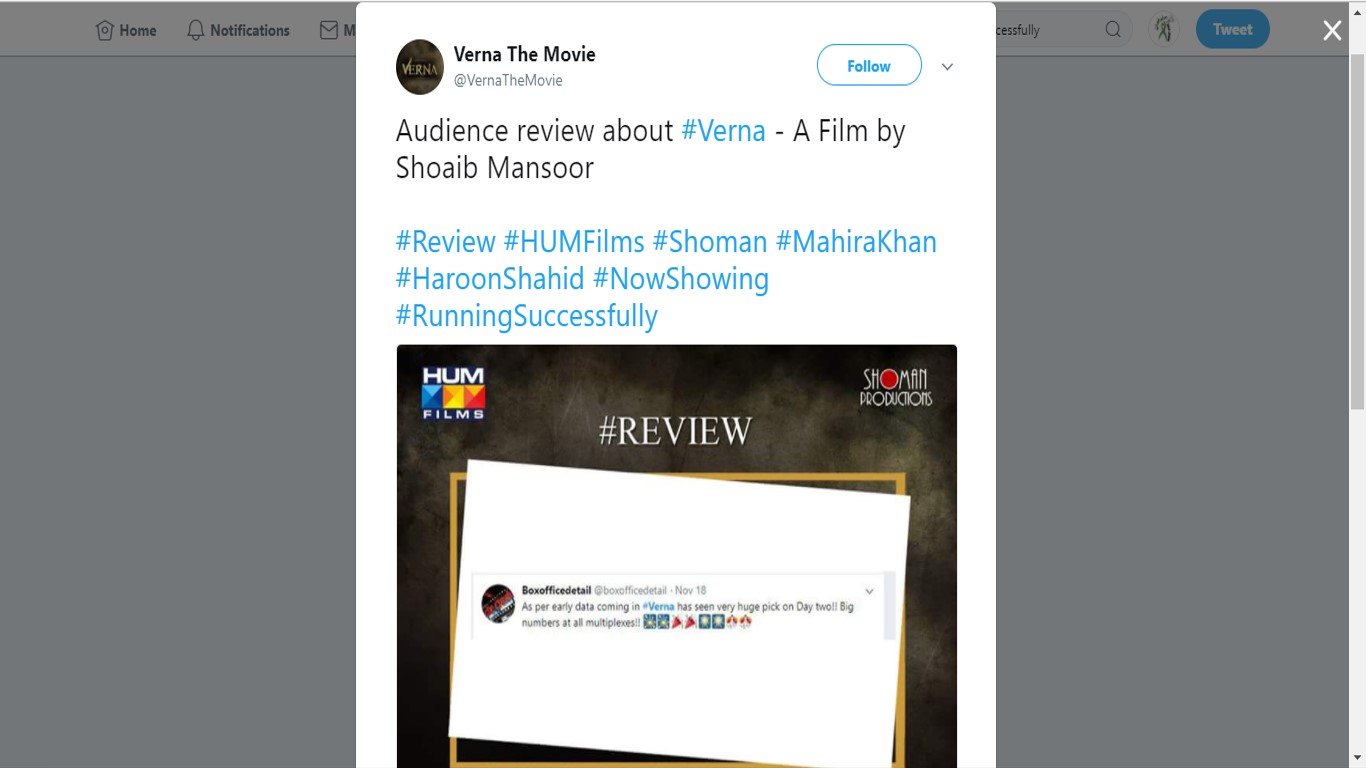 It’s the fifth day since Verna hit the theaters in Pakistan. The pre-release hype around the film was quite positive, which ensured a good weekend at the box office. Of course the controversy surrounding a possible ban also helped to keep the film on everyone’s radar prior to its release.

We browsed through our Twitter feed to see the audiences’ verdict after stepping out of the cinemas. Let’s see what people are saying using the hashtag #Verna.

Based on the response received so far, there’s a significant section of the audience that does not seem happy with how the film has turned out.

For instance, this guy was brutal!

Skip #verna, do ecstacy instead. At least you'll have fun while losing gtey cells

This people were no different.

Now to watch #Verna and add it to my long list of disappointing films.

Watched #verna and frankly didn't enjoy it as much as I have enjoyed other Shoaib Mansoor's films. Mahira's acting lacked depth and Haroon's character sketch was weak. The ending was bizzare and unrealistic. Still a good step to raise further awareness on this topic.

Bad reviews not withstanding, there are many who did not shy away from praising Verna.

And #Verna is by far @TheMahiraKhan's best till date, bettering the high on hype and less on substance #HoMannJahaan

Shoaib Mansoor has his own die hard fans too of course.

A must watch.#verna is amazing movie *except last 10 mins.
Its best of Shoaib Mansoor till date. It requires heart to make such film. Went In cinema being his https://t.co/RsTTnjoTVS out as his Fan.
8/10 becoz of ending . It could have been easily 10/10 if ended without finale.

Just saw #Verna @TheMahiraKhan was terrific. Despite being her fifth film, #MahiraKhan carries the film with such an excellent performance. Truly a progressive movie for which @ShoManOfficial must be applauded. I strongly recommend you see this! @VernaTheMovie @Humtvnetwork

Some people genuinely appreciated the content of the film.

Thank you for making such a movie & for talking about such bold topic. Job well done! @TheMahiraKhan #Verna

The same guy went as far as to say the critics should not be taken too seriously.

Also Read: Here’s Why I’ll Always Be In Awe Of Nazia Hassan

Critics are just doing their job. Movie is engaging with important issues+message. #Verna

There are also who neither loved nor hated the film.

I watched Verna and was not completely impressed with it. Many things did not make sense to me. However I would still urge ppl to go watch it, form your own opinion and support the movie. It’s not easy tackling such a taboo topic! #Verna

What is Twitter without the analysts. There’s a huge population on the micro-blogging website that believes in analyzing any subject from the perspective of the “bigger picture.”

Whether its politics or sports, entertainment or gibberish, analysts own Twitter.

Take this guy for instance. He didn’t just give a one line verdict on what he thought about the movie, instead he analyzed where the entire Pakistani film industry was headed.

Great Topic but not well executed #verna. Definitely pak cinema on right track yet a long way to go

The message is bigger than the movie…interesting.

What did you think of Verna? Do tell us in your comments!