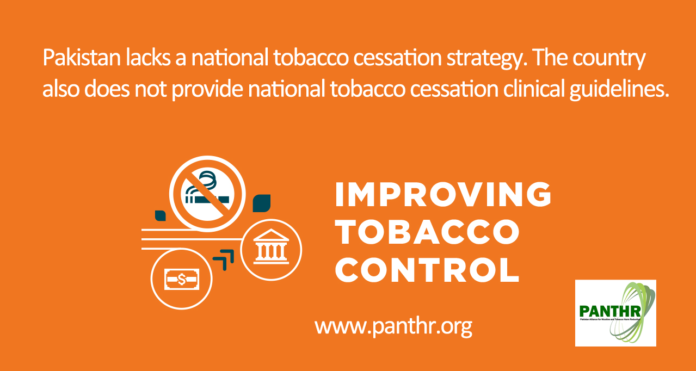 Pakistan Alliance for Nicotine and Tobacco Harm Reduction (PANTHR) has called for making harm reduction and cessation part of the national tobacco control policies to reduce the prevalence of smoking in the country.

According to the study, in low- and middle-income countries (LMICs), health care practitioners’ knowledge, attitudes and practice regarding tobacco use and cessation may hold the key to rapidly scaling up cessation support and delivery to achieve FCTC objectives sooner.

Under Article 14 of the FCTC, member states have to take effective measures to promote cessation of tobacco use and adequate treatment for tobacco dependence.

Arshad said Pakistan currently does not have a national tobacco cessation strategy, lacks cessation clinical guidelines, does not include tobacco in at least one national disease specific treatment guideline, and tobacco use status of patients is not routinely recorded on medical grounds. As there is no national toll-free quit line as a part of health warnings or mass media campaigns, training in tobacco cessation is not included as a part of the medical degree or associated medical training in Pakistan, he added.

The study said innovation in cessation products and services needs to build on learnings in nicotine pharmacokinetics, behavioural insights from consumer research and tap into 21st century tools such as mobile based apps. “National implementation of FCTC’s Article 14 needs to follow guidelines that encourage integration into existing health programmes and health-care practitioners’ (HCPs) upskilling.”

Tobacco smoking is endemic with more than seven million deaths occurring every year amongst the 1.1 billion smokers worldwide, with 80% of tobacco users in the world’s low and middle-income countries, according to WHO.  One of the six primary tactics adopted by the WHO to counter the tobacco epidemic is promoting cessation, the subject of its 2019 annual report.

The other study Tobacco Harm Reduction in the 21st Century by Renee O’ Leary and Riccardo Polosa calls for addressing the barriers to tobacco harm reduction if it is to make the maximum impact on the tobacco endemic. Both the researchers are based at the Center of Excellence for the Acceleration of Harm Reduction, University of Catania, Italy.

“These products have been subjected to regulatory bans and heavy taxation and are rejected by smokers and society based on misperceptions about nicotine, sensational media headlines and unsubstantiated fears of youth addiction.”

According to the study, tobacco harm reduction seeks to prevent or reduce the damage caused by the toxins generated by tobacco combustion for smokers unable or unwilling to stop, rather than aiming at complete abstinence from nicotine use.

The study says displacing combustible tobacco products with non-combustion products that deliver nicotine with a lower toxic and risk profile is key to tobacco harm reduction, and may promote the cessation of cigarette smoking. “In the 21st century, three classes of products can fulfill this role, namely, snus (oral use tobacco), e-cigarettes (vapor products) and heated tobacco products (heat-not-burn),” it maintained.