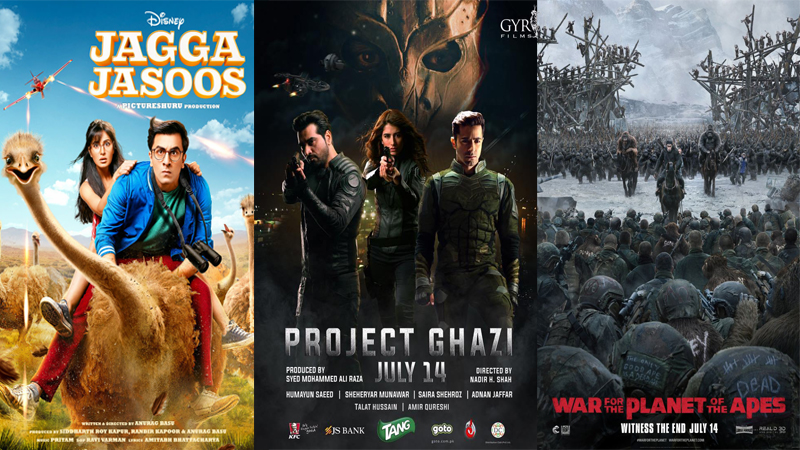 After a line-up of films that were badly panned by the critics and the masses alike on Eid-ul-Fitr, Box Office Pakistan will see the release of three much anticipated films this week.

What’s interesting is the fact that each of these three films represent three different film industries, i.e. our very own Lollywood, Bollywood and of course Hollywood.

Let’s take a look at each of these upcoming releases and see what chance they stand at the box office this weekend.

From the point that the teaser of Project Ghazi was launched earlier this year, the film garnered a lot of interest among the cine goers. This upcoming release boosts an impressive cast that includes Humayun Saeed, Sheheryar Munawar, Syra Shehroz, Adnan Jaffar and beloved veteran actor, Talat Hussain.

Project Ghazi is a superhero film – the first to come out of Lollywood in decades!

In all honesty while Project Ghazi’s full trailer worked as a bit of a spoiled sport (owing to below par VFX and jerky editing) nevertheless, the film’s marketing campaign has been successful in generating a good vibe ensuring a decent total on its first weekend. Monday will then serve as a litmus test to decide the life of the film’s theatrical run.

Also Read: 3 Areas Where Our Film Makers Need to Get Things Right

This is one film at audiences in both Pakistan and India have been waiting to see for almost three years. After multiple delays Jagga Jasoos is finally releasing this weekend and there is a lot of hope from this Ranbir Kapoor-Katrina Kaif starer given that it is Anurag Basu’s first release after the success of Barfi! in 2013.

Jagga Jasoos follows the life of a gifted detective who goes out on a quest to search for his missing father.

Despite a delay of three years, the excitement around this Ranbir Kapoor starer has not diminished and so it might become that rare delayed release that enjoys a good box office run. Jagga Jasoos will also be the first news-worthy Bollywood release since Badrinath ki Dulhaniya and so its very likely to pull huge crowds to the theaters this weekend.

War for the Planet of the Apes

Following the events of the Dawn of the Planet of the Apes, Ceaser and his apes are at the losing end of the war against humans. Ceaser will have to fight out a decisive battle against the Colonel and gorilla Red for the survival of his race.

Like America and Europe, the franchise has a pre-existing fan base in Pakistan as well. Even though it is an English release, the film is likely to attract sizable audiences in the urban multiplexes.

On the whole it seems that each of the releases will experience a good turn out on their first weekend in Pakistan making both the audiences and cinema owners happy!