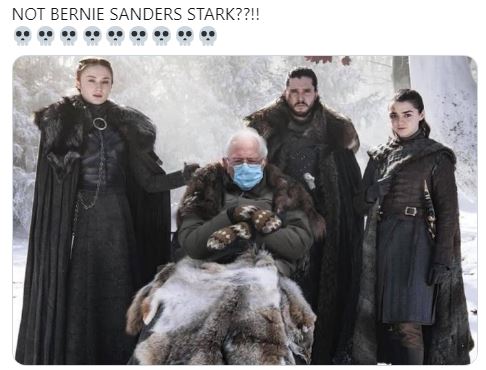 He got the mittens, according to the Washington Post, from Jen Ellis, a second-grade teacher in Vermont. As a side hustle, Ellis and a partner began making mittens years ago and sent Bernie a pair of them one fine day but it wasn’t the end of the story!

When a gazillion photos were taken at the inauguration, everyone’s attention was captured by one: Bernie Sanders looking cold and casual, sitting in the stands, and social distancing from others.

It was a mood that we can all relate to when we stood out from the crowd by sitting down. And his mood was translated into memes in a couple of hours and, of course, we shortlisted some of them for you.

waiting for my mom to finish shopping pic.twitter.com/RBIbfOhNGB

“This could’ve been an email” pic.twitter.com/kn68z6eDhY

Sanders could have played the role better for Bran Stark, too bad…

It’s like they don’t even know that we are in a Global Pandemic!!!

me staying safe and social distancing while watching people at bars and vacations on their IG stories pic.twitter.com/bJbpDSpp2q

Unfortunately, we can’t go to concerts with this pandemic on the loose.

why is bernie what i used to look like queuing for concerts in winter ?? pic.twitter.com/zLxTmtQDiy

This is so cool, Deadpool x Bernie Sanders. Can’t wait to see Sanders in Deadpool 3.

He’d be spying on him to see if he ain’t giving away the launch codes.

These ones are just hilarious!

Just a few of my favorites 💕 #BernieSanders pic.twitter.com/S5DhXRGuZZ

Lets see if you can find Bernie Sanders. I bet you can’t.

OMG this is great…. the best one 🤣🤣🤣 #BernieSanders pic.twitter.com/SYTYX3se1V