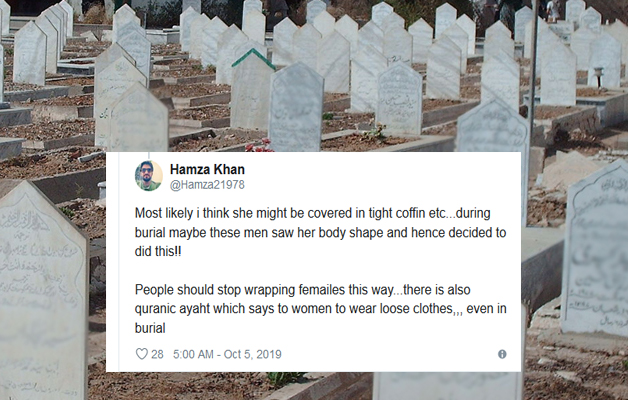 Recently a Pakistani netizen posted a news report from 2011 about a necrophile from Karachi who had raped at least 48 female corpses.

While everyone on the thread seemed repulsed with the story, there was one, Hamza Khan, who went to great irrational lengths to justify this horrific act.

According to Hamza Khan, the culprit was “most likely” tempted because the corpses “might be covered in tight (burial cloth).” He even had the nerve to justify this horrific crime by bringing in religion, saying that women should be covered in loose clothes!

And no, he just did not stop there…

He went on to say that men are made this way and when women push them by wearing revealing clothes they end up raping them.

He felt no shame in justifying necrophilia and continued to invent illogical reasons to defend it.

He also had the audacity to say that it was not a big deal considering that those women were already dead!

In 2011, Muhammad Rizwan from North Nazimabad, Karachi was arrested after he confessed to raping 48 female corpses.

Jasmeen Mazoor, a journalist interviewed Rizwan where he confessed to his crimes.

Rizwan was caught when he tried to run away after getting scared by a dead corpse. He caught the attention of grave diggers and some other people nearby.

Rizwan had been working at the graveyard for eight years. His crimes went unnoticed because he often picked graves that had been freshly dug.

Read: “Durj” By Shamoon Abbasi Gets Banned For Portraying Cannibalism

Some people went as far as appealing to the government of Pakistan to investigate the man regarding his bizarre justification of necrophilia.

For men to blame women for any wrong act done to them is not something new. In fact, the type of clothes a woman wore is always brought up while talking about a sexual assault case. And unfortunately, even in this time and age, people continue to cite a woman’s attire as a reason for sexual violence.

But this is a new low even for people who resort to victim blaming, considering that those 48 women were not even alive. How could people like Hamza bring in women’s clothing in this matter is entirely beyond our imagination!

What do you have to say about Hamza’s response regarding necrophilia in Pakistan?