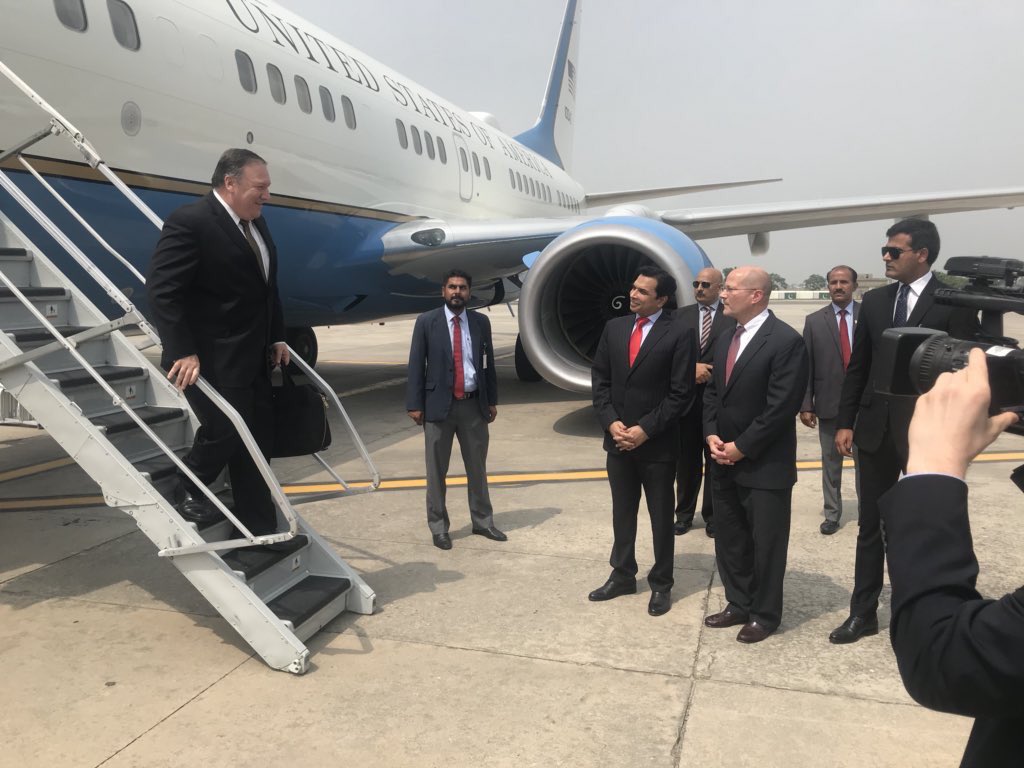 The US Secretary of State Mike Pompe and the US military chief Gen Joseph Dunford arrived in Pakistan today. It is expected that the US officials during their stay will hold talks with Prime Minister Imran Khan, Foreign Minister Shah Mehmood Qureshi and Chief of Army Staff Gen Qamar Zaman Bajwa.

That Pakistan and the United States are experiencing the worst chapter in their bilateral relations is no secret.

The United States has been pushing Pakistan to “do more” in terms of eradicating terrorist outfits that it alleges are operating from Pakistani soil. On the other hand, Pakistan has been complaining about receiving little respect or acknowledgement by the US at the global level for its key role in the global war on terror.

As reported by the New York Times, Pakistani officials are also deeply mistrustful of the United States as they feel that the latter wants to use Pakistan as a scapegoat to justify its own failures in Afghanistan.

The last few years have thus, seen an alienated Pakistan distance itself from the US and turn to China for support. United States on its part has not taken this politely and Pakistan has periodically been at the receiving end of verbal bashing by various US officials, including president Donald Trump.

Depending on how it pans out, Mike Pompeo’s visit can then either serve as the last nail in the coffin or can give a fresh lease of life to the Pak-US relations.

In Mike Pmpeo’s own words, he was visiting Pakistan to “reset” bilateral relations between the two countries.

Read: Of Donald Trump, Twitter And The ‘Do More’ Mantra

“First stop Pakistan; a new leader there. I wanted to get out there at the beginning of his [Khan’s] time in an effort to reset the relationship between the two countries,” Pompeo told reporters while on-board the flight to Pakistan.

Given the sensitive nature of the current state of relations between the two nations, there is a lot of speculation regarding the outcome of the talks.

Unlike Pompeo, not many Pakistanis are optimistic about the result.

1. America will continue to see push-back from Afghanistan, regardless of the 2+2 process it’s investing in. 2.Unfortunately Pompeo’s visit to Islamabad will only underscore the disconnect on the ground if the US team decides to position all Taliban discontent as made-in-Pakistan

The pessimism on the Pakistani side is springing from the United States’ history of patronizing rather than respecting as equals, its partners from the developing world.

Although Imran Khan has divulged the intended course of action for bilateral ties – that is to be based on mutual respect and cooperation – the US leans on the policy of patronizing Pakistan which hasn't fared well in recent times. #Pompeo & US need to adapt to changing times.

However, despite the lukewarm welcome given to the American visitors, Pakistan, it seems, might not be ready to do away with the United States as a global partner entirely.

Is it striking that the death of the leader of the terror group at the heart of US-#Pakistan tensions is announced right on the eve of Mike Pompeo's visit to Islamabad? Oh, yes.
That said, Jalaluddin Haqqani had been ill for a long time. The timing could be purely coincidental.

The irony of the Pak-US relations – especially in their current form – was best described by this Pakistani.

The Pak-US relationship is perhaps the most complex and the oddest of relationships. The two are supposed to be allies but are also regarded as adversaries. Some use the term ‘frenemy’ to describe them or refer to their situation as a ‘magnificent delusion’.#Pompeo #GenDunford

The final outcome of the talks is still anybody’s guess, however given the skepticism in Pakistan, it is obvious that a fruitful result cannot be expected without superhuman amounts of flexibility on both sides.

In the next 24 hours, we will find out if flexibility – if at all any – was shown by either side.