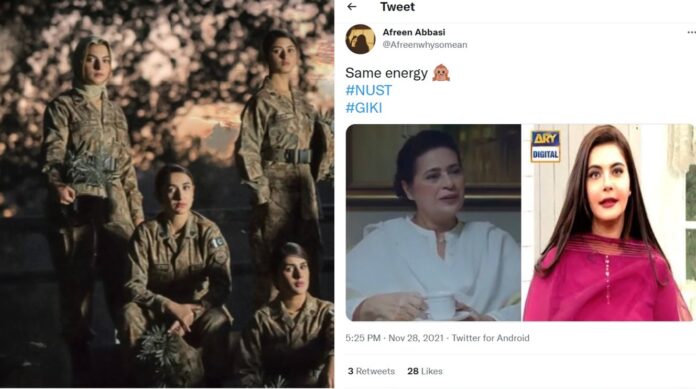 The first episode of the ARY drama Sinf-e-Aahan in its aftermath has triggered a major NUST vs. GIKI battle and it’s hard to not follow it if you’re an alumnus of either one of the institutes.

But how, you ask?

You see, there was a scene where an aunty-type asked Sajal’s character about where she’d graduated from. The response was, “NUST.”

Now, for most aunties that should have sufficed and they would’ve moved on swiftly to another topic. But not this aunty. To Sajal’s “NUST,” she responded with, “But why not GIKI?”

Turns out this single scene was fodder enough to erupt a major, nationwide Twitter battle!

A face-off in the same household? Yikes!

Quiz: Rate These Cringey Pakistani Drama Scenarios To Reveal The Word That Truly Resonates With You

Apparently, a degree from GIKI trumps the need for a gol roti qualification!

And while GIKI celebrated, Nustians tried hard to remind them of their auqaat.

Rumor has it that graduates from all other universities across the country were found grabbing popcorns and watching the phadaa.

Whoever made this meme is a winner!

Quiz: I Am Genuinely Curious If You Like These Pakistani Movies And Dramas

Hopefully, this fight will die down. And both universities can still get along soon! Yeah right!

Here’s the Sinf-e-Ahan promo if you haven’t had the chance to watch it yet!