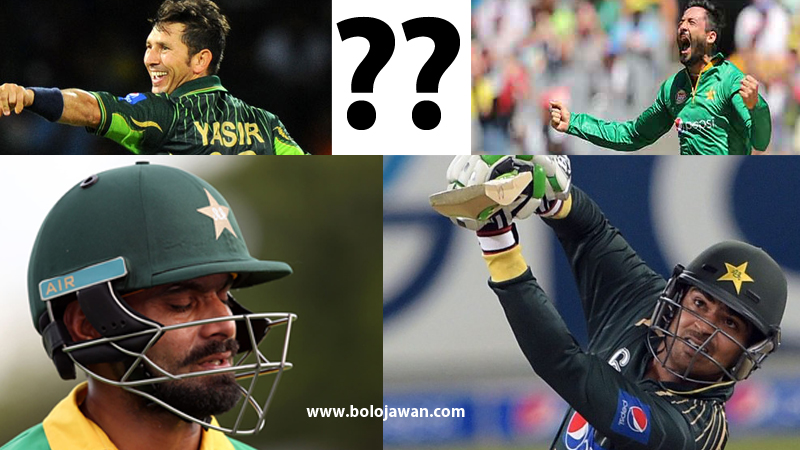 Following the T20 tri-series victory Pakistan now play a five match One Day International (ODI) series against the Zimbabweans. With less than a year before the ICC world cup, Pakistan will be looking to make use of the opportunity against a relatively weak but still a threatening opponent to settle their ODI combination. Fakhar Zaman, Babar Azam, Sarfaraz Ahmed, Shoaib Malik, Faheem Ashraf, Shadab Khan, M. Amir and Hasan Ali for now seem to have consolidated their place in the playing eleven. However, here’s a list of 6 Pakistani cricketers who will be under pressure to perform in Zimbabwe so that they are able to become first choice members of Pakistan’s ODI squad.

Asif has shown brilliant form in the T20 series and has done well down the order to finish off games. Looking for a finisher in ODIs also, the think tank is likely to provide the 26 year old an opportunity to cement his place before the next mega event next year.

Haris Sohail hasn’t been in the best of forms during the last few months and with other players available to bat up and down the order, the left-hander will have to be on his A-game that is if he is allowed an opportunity and that is if he really wants to extend his ODI career from here.

Neither outstanding nor ordinary, Nawaz so far has had a somewhat okayish start to his international career. Keeping in view the spin friendly wickets in Zimbabwe the 21 year old might get a couple of games or so and hence, will need to deliver with both bat and ball to earn a permanent place in Pakistan’s ODI squad.

Junaid is making a comeback following a yet another injury. With Usman Shinwari showing decent form, the senior-pro is in for some tough competition and apparently has very little margin to waste an opportunity that comes his way.

Wrist spinners seem to be the need of the day in limited overs cricket and that perhaps is the only reason why Yasir has been allowed a comeback in the ODI squad. The leggie if given a chance has to go out with a nothing to lose approach and deliver or else this might as well be the last time we see him in action at the ODI level.

Read: 3 Reasons Why Mickey Arthur Has Benefited By Coaching Pakistan!

With the think tank not looking to facilitate senior players ahead of the junior members in the squad, this can prove to be a make or break series for M. Hafeez’s career.

To make matters worse he is not being considered for Test matches and his T20 place is already under the scanner pretty much like his bowling action. A bad ODI series here might as well prove the last nail in the coffin and result in pre-mature end to his international career.