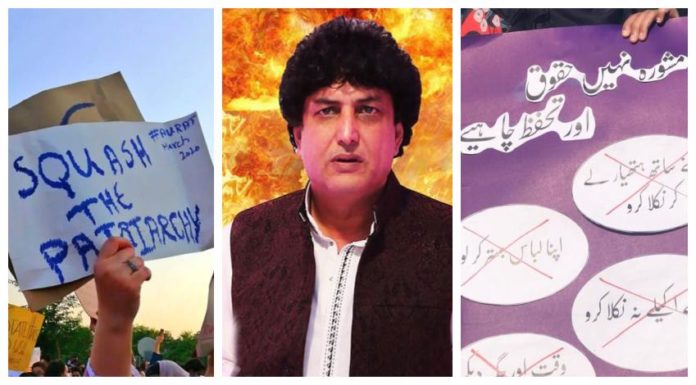 Khalil-ur-Rehman Qamar, unable to contain his misogynistic views has once again stirred controversy. The target of his chauvinism this time are the motorway incident protesters.

Khalil-Ur-Rehman Qamar in his latest interview went after the motorway rape incident protesters by calling them “Bhaandon Ki Fauj” on live TV.

He was intrigued to know if the women who participated in the protest got “permission” from their fathers or brothers as if someone has appointed him as the sarbarah of the women in this country.

And no he didn’t stop there, he continued to ask if the women wanted the kind of freedom where they could go into a room with their boyfriends while their fathers/brothers stood guard outside the door!

No, there’s absolutely no reason to even try and make sense out of this gibbrish.

Also Read: From Mahira Khan To Shehzad Roy, Celebs Are Lashing Out At Khalil-ur-Rehman Qamar For Abusing Marvi Sirmed

Scores of Pakistanis are of course incessantly facepalming since the writer’s latest controversial interview went viral.

But it’s hard to blame Khalil-ur-Rehman Qamar alone without calling out the TV channels that keep inviting him for the sake of TRPs.

I mean, who died and made him a spokesperson for women’s rights issues?

And oh btw, he even tried to score points by showing up at one of the marches but was called out by the protesters!

Have something else to add to this story? Share your view in the comments below!