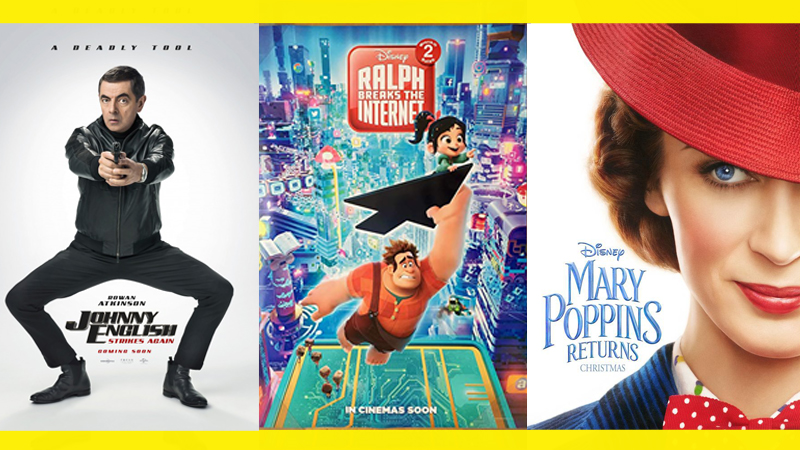 2018 is swiftly moving towards its end. And as is the case every year, the last quarter often sees a series of releases that hold immense blockbuster potential.

Read: The 5 Most Anticipated Action Films Coming Out of Hollywood In 2018

The list is especially long this year with no less than 30 films line-up to hit the big screen between October and December 2018. However, not all of them inspire the same amount of excitement as films like Johnny English Strikes Again and Aquaman.

So, we picked the 11 most exciting titles from the list of Hollywood movies releasing in the last quarter of 2018 and we have a strong feeling that they will all hit the bull’s eye at the box office!

Yes! Rowan Atkinson a.k.a. Mr. Bean a.k.a. Johnny English is coming back again!

The very idea of Johnny English being the British Secret Service’s last hope is quite simply hilarious and certainly reason enough to for fans of the franchise to await the release with held breath!

The movie has already released in Pakistan and will hit the screens in the United Kingdom and United States on 5th and 26th October respectively.

The first film in Sony’s Marvel universe, Venom will see Tom Hardy in the avatar of the dark, scary and the rather twisted alien symbiote, Venom.

The film will see a worldwide release in cinemas on the 4th of October 2018.

It is impossible to find a person who understands English language and has not heard Queen the band chanting, “We will, we will, Rock You!”

20th Century Fox, it seems has done an excellent job in capturing the most extraordinary moments in the history of the beloved band, most importantly the pivotal role of its lead singer Freddy Mercury (played by Rami Malik) in making Queen a cult act.

The film will release in the United Kingdom on 24th October while it will be unveiled for the audiences in the United States on 2nd November.

Hollywood movies towards the end of the year can’t do without a Christmas or a Grinch-themed offering.

Dr. Seuss’ The Grinch, a computer-animated comedy movie on how Mr. Grinch decides to ruin people’s Christmas is expected to have a worldwide premier on 9th of November and is likely to be a hit among both kids and adults alike.

Fantastic Beasts: The Crimes of Grindelwald

Harry Potter fans have been awaiting the second installment of the Fantastic Beasts trilogy with great anticipation. The release of Fantsastic Beasts: The Crimes of Grindelwald is finally upon us and we can’t wait to be taken back to J.K. Rowling’s world of magic, beasts and wizards.

Eddie Redmayne will return as Newt Scamadner, while Gellert Grindelwald and a young Dumbledore’s characters will be played by Johnny Depp and Jude Law respectively.

The movie will release on the 16th of November.

Releasing on 21st November, Wreck-It Ralph will certainly break the entertainment world with his second adventure where he and Vanellope go out of the game world to explore the world of the Internet.

Also releasing on 21st November is Creed II. Sylvester Stallone will return as Rocky Balboa but not to box. His character will serve as a mentor to prepare boxing sensation Adonis Johnson to avenge his father’s death.

The movie is expected to hit big with its mega famous cast and great pre-release buzz.

Taron Egerton will return to the big screen this fall as the legendary bandit, Robin Hood with Jamie Fox playing the role of his mentor.

This high budget action-adventure film is the third offering queued for a November 21st release.

44 years after making her first appearance on the big screen, Mary Poppins will return to look after the Bank’s children once again.

With the gorgeous Emily Blunt playing Mary Poppins, the movie is likely to pull huge crowds to the theaters.

The Disney film will see a global release on 19th of December.

Jason Momoa as Aquaman will be accompanied by Amber Heard as Mera as they take on an underwater threat that threatens the existence of the entire world.

Last on our list is a Transformers’ movie with Bumblebee taking form of his usual yellow color but as a Volkswagen and is on the run taking refuge in a junkyard back in the year 1987.

Bumblebee will be releasing on the 21st of December.

Read: Trailer Of Thugs Of Hindustan Is A Wreck & People Can’t Help But Troll!

Which of the Hollywood movies releasing in the last quarter of 2018 are you most excited about? Let us know in the comments!