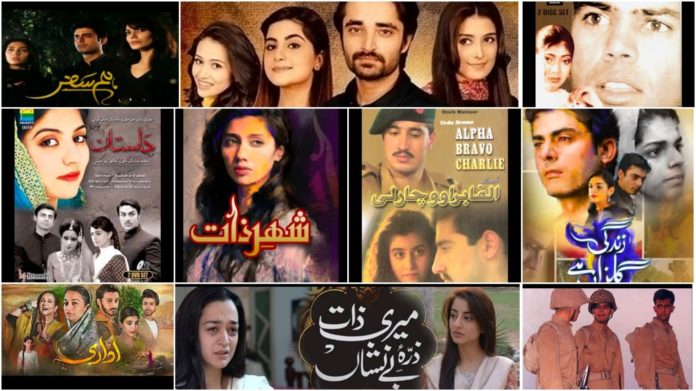 If you’re out of content to binge over the weekend, we have for you five Pakistani dramas based on novels that will keep you sufficiently entertained!

If you’re a Gen Z’er, chances are you probably haven’t heard the name. But your parents would definitely be familiar with this masterpiece.

The drama was based on the first Urdu novel by Nazir Ahmad Dehlvi and adapted for television by Pakistan Television Corporation under the same name. The role of “Akbari” was played by Irsa Ghazal and “Asghari” was played by Arifa Siddiqui.

In 2011, this story was once again adapted into a comedy television drama, by the name of Akbari Asghari, which aired on Hum TV. The role of Akbari was played by Sanam Baloch and Asghari was played by Humaima Malik. Imran Abbas Naqvi and Fawad Afzal Khan played the male leads.

Similarly, in 2013, the story of Akbari and Asghari continued with Mirat ul Uroos, a Geo TV drama. This serial is about the granddaughters of Akbari, played by Aamina Sheikh and Mehwish Hayat, and the grandsons of Asghari, played by Mikaal Zulfiqar and Ahsan Khan.

Dastaan is one underrated piece of art that sadly didn’t get much attention from millennials when it was first aired. Based on Razia Butt’s novel “Bano,” Dastaan is based on the separation of a young couple following the 1947 partition of the sub-continent.

Starring Fawad Khan as Hasan and Sanam Baloch as Bano, the drama series shows Bano’s abduction and forced marriage to a Sikh in the aftermath of the riots.

Read: The Pakistani Dramas You Choose Will Reveal Your True Age

Dastaan was first aired on Pakistan’s Hum TV in 2010 and is often considered one of the finest works produced on partition in contemporary times. The serial won several awards and nominations for its content as well as stellar performances.

Jo Chale To Jaan Se Guzar Gaye is another interesting drama based on a novel of the same name writer by Maha Malik. The cast consists of veteran actor Noman Ijaz as Sayed Alam Shah, Sami Khan as Azar, Saba Qamar as Zufishan and Qavi Khan. The serial premiered on Geo TV on 19 September 2011.

Farhat Ishtiaq is well-known for penning the scripts of dramas like Humsfar, Diyar e Dil and Bin Roye but the critically acclaimed, Mere Humdum Mere Dost isn’t on the list.

Farhat Ishtiaq has adapted her own novel, Mere Humdum Mere Dost, for the screen which aired on Urdu1 on 18th April 2014. This romantic drama consists of an ensemble cast including  Adnan Siddiqui as Haider, Sanam Jung as Aimen, Hareem Farooq as Sajeela, Farhan Ali Agha as Taufeeq Kamaal.

If you’re a Pakistani drama, you would of course be very familiar with celebrated writer Umaira Ahmad and her work. She is famous for dramas like Zindagi Gulzar Hai, Meri Zaat Zarra-e-Benishan, Shehr-e-Zaat and more recently, Alif.

However, chances are that you might not have seen the lesser known, Man-O-Salwa based on Umera Ahmed’s novel of the same name.

The story revolves around the themes of poverty and materialism and their impact on human emotions. The drama was broadcast in 2007 by Hum TV, featuring senior actors, Resham, Faisal Qureshi and Noman Ijaz.

Which of these Pakistani dramas will you be watching this weekend? Let us know in the comments section below!