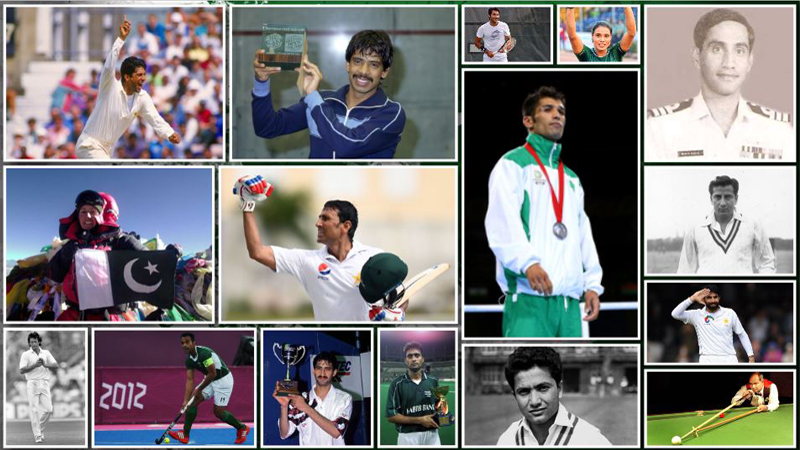 It is no secret that Pakistan is blessed with some of the most talented individuals in any given field. Here is a list of top 14 Pakistanis from the world of sports who have made us all proud over the last 7 decades.

Pakistan was expected to lose all four Test matches to England for all the obvious reasons when they toured the country for the first time in 1954. The green shirts lost the first game and the other two rain effected games ended in draw. However, Fazal Mehmood bowled a mesmerizing spell to pick up 12 wickets in the final Test that allowed Pakistan to beat its former colonial masters and draw the series one-all.

Winning multiple double titles Aisam-ul-Haq to date has kept Pakistan’s name alive in the world of Tennis and hence, deserves to be listed as the best Tennis player in the country.

The original “Little Master” Hanif Muhammad to his credit has the distinction of playing the longest individual innings (970 minutes) in Test cricket during which he piled up 337 runs against a fierce some West Indies bowling attack.

Also Read: 3 Cricketers from 90s who Deserve a Biopic

Munir Sadiq is the most successful yachtsman in the country to have won three gold medals at the Asian game.

Also Read: Celebrate Jashn-e-Azadi with Wahyd and Get up to 35% Discount on Your Favourite Restaurants!

Moreover, in 1998 he became the first sailor to have won 5 medals in the Asian games.

Also known as the queen of the track, Naseem Hameed is the first woman in South Asia who against all odds won a gold medal for Pakistan in the 100 meters during South Asia Games held in 2010.

Muhammad Waseem from Quetta, Balochistan is the only boxer from Pakistan to have held a prestigious professional title and thus, is the best the country has produced so far.

For the number seven position it is a tie between two cricketers from different eras i.e. Wasim Akram & Misbah-ul-Haq.

Considered as the best left arm fast bowler ever, Wasim Akram apart from playing an instrumental role in Pakistan’s 1992 world cup victory also holds multiple world records. Misbah-ul-Haq on the other hand has the distinction of leading Pakistan to the number 1 ranked Test team in the world and therefore, leaving anyone of the two out is just not possible.

Arguably the best forward ever to have played field hockey Shahbaz Ahmed Senior to his credit led Pakistan to the 1994 world cup and champions trophy victories. Also known as the “Maradona of Hockey”, the former Pakistani captain is a recipient of various national and international awards.

Having scored a world record 348 goals penalty corner specialist, Sohail Abbass is an all-time great of field hockey and a man who made Pakistan proud on countless occasions.

Besides leading Pakistan to a T20 victory Younis Khan also has the distinction of being the only Pakistani to have scored 10,000 runs in Test cricket. The recently retired super star is hence, the most successful Pakistani batsman to date.

Besides leading Pakistan to world cup victory in 1992 Imran Khan to his credit is the first and so far only Pakistani captain to have led the green shirts to Test series victories in England and India.

His charismatic personality played a massive role in making cricket the most popular sport in the country.

Holder of multiple world records Jansher Khan is amongst the best players to have played the game of squash. Pakistan’s dominance in the game only ended the day Jansher retired.

Jahangir Khan makes it to the number one position because to date he is the best squash player the world has ever seen and his world record of winning 555 consecutive matches is the longest winning streak by any athlete in professional sports.

Samina Baig on the other hand has the honor of defeating difficult circumstances and preparing herself against all odds to do what perhaps, no other woman in the country could have dreamt to do i.e. conquer the Everest.

When you compare the circumstances of the two there is little choice but end the list with a tie!