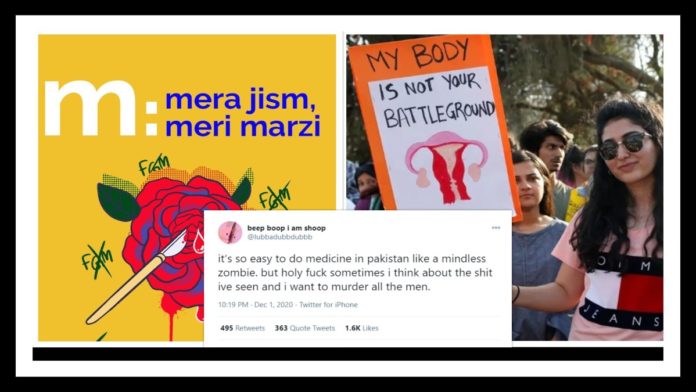 According to reports Pakistan is ranked as the sixth most dangerous country in the world for women. Not a day goes by where we don’t come across news of women being abducted, becoming a victim of domestic abuse, encountering sexual assault, surviving rape and whatnot. The list is endless and gets more harrowing.

One twitter user who goes by the screen name @lubbadubbdubbb tweeted a thread about her encounters with rape and sexual assault survivors in the emergency room. She fumingly wrote, “sometimes I think about the shit I’ve seen and I want to murder all the men.”

Trigger Warning: The thread ahead has rape and sexual assault stories of different women in the Emergency Room.

We are completely aware of the plight of women in this country yet we seem to turn a blind eye every time a woman speaks up for herself. The collective uproar of Pakistanis against Aurat March is testament to that. It is this sickening mentality and sheer ignorance of our nation in general that we come across incidents like these.

This doctor’s experiences are so vile that your mind will stop registering anything for quite some time. Imagine the misery of women who had to live through those ghastly nightmares.

Also Read: #MeToo: No Waseem Badami, Ayesha Omar Shouldn’t Have To Apologize For Not Speaking Out Earlier About Being Sexually Assaulted

What are these men?? We can’t even call them animals. It will be a disgrace to the whole animal kingdom.

Unimaginable. I don’t even know why we can’t understand the mere fact that we all have a right to our bodies. They are sacred. Nobody should be allowed to do this to anybody. Why is this so difficult to process. Why can’t these people get this inside their pea-brains that body autonomy is a thing. Bodies are private. They are our sanctuaries.

Disgusting how educators are setting such horrible examples for their students.

We’re in the middle of #16daysofactivism, awakening the world to miseries of women across the globe. Educating masses on how to be an active part in this movement and men are roaming around, tearing women’s sanctuaries.

Other users also expressed their grief after reading this nightmarish thread

Do you have something else to share? Write down in the comments below.