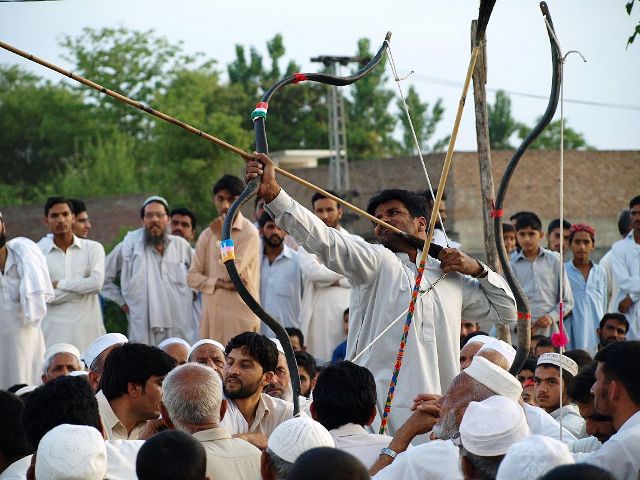 The local grassland in the outback of a rural village is all packed with locals. Orange horizon in the background with rising smoke from the village’s chafers, the pin-drop silence is about to snap as a “Mukhwaal” draws his bow and takes aim at his target. The only sound that breaks the silence is the creak of pulling the bowstring. The crowd is all eyes and awaits ‘the’ moment when suddenly they thrust into dancing to the bass of drums – a sign that the archer has hit the bull’s eye.

Hundreds of “Mukhwaals” (Archers) dream of wearing the national color while practicing the sport in their local fields every evening, a field where they work all day long caring for their crops in rural Khyber Pukhtoonkhwa. However, the only color they own is that of the soil to which they sacrifice their sweat, blood and dreams.

The sport of “Mukha” or “Mookha” is an indigenous sport similar to Archery and carries a history of more than a century in Yousufzai and Muhammadzai belts of the North West region of the country. The popular districts with local champions are Swabi, Mardan, Buner, Lakki Marwat and Charsadda.

In earlier days, archery was used as a long distance weapon in wars much like snipers in the modern day warfare. However, with new technology and state-of-the-art arms, archery became merely a global sport. Though the world currently has a significant number of countries that allow hunters to pursue their game with archery tools, “Mukha” is the only sport in Pakistan that associates with the tradition of archery. Even within Pakistan, it is specifically limited to the Pashtoon-inhabited regions of the country, serving as a local entertainment for the villagers.

The bow or slingshot, called “Leenda” in local dialect sells for as much as Rs. 20,000 (approximately $200) and the craftsmen who fabricate these bows hail from the tribal area of Bajaur Agency. Traditionally, an ideal “Leenda” is made from the horns of “Markhor” – an exotic species of wild goat found in the forested mountains 4000M-4500M above sea level in the Karakoram and Hindukush ranges. The acquisition of these horns alone implies the significance and effort that goes into fabricating the bow and how it is valued by the sportsmen.

In the game of Mukha, each team has 10 players with 2 extra players in case of non-availability of a regular member. With each player, there is an assistant who prepares the target each time the Mukhwal has a turn to shoot. This again replicates the role of Spotter in modern day sniper or long distance shooting with modern metallurgy. The chances of hitting the target are slim if the assistant of Mukhwaal is not there. This shows the coordination, understanding and the bond required between the sportsmen.

The target is called “Takai” placed in a metal circle called “Kwaara”. These are fitted into a block of wet clay at a height of 8 feet from the ground. The distance between Mukhwaal and the target increases as the game progresses towards the final round. The Mukhwaal hits the target with a long arrow (4 feet long) made of bamboos and called “Ghashai” locally. Unlike the hunter’s model of arrow, the tip is not pointed but is instead in the shape of a flat metal coin. This has evolved keeping in view the safety of the spectators and organizers during the game.

Though the sport is a globally recognized one as part of the Olympics, Mukha is native to this region which makes it more exotic and signifies a lifestyle rather than just a sport. Tracking back, the sport has its roots in Islam with sufficient sources on the authority of numerous companions of our beloved Prophet (PBUH). Saad Ibne Abi Waqas is known to be the first Mukhwaal or archer in the companions of the Prophet Muhammad (PBUH) and the one who used his bow for the first time in war of Uhad.

This sport demands the same focus, strength and sportsmanship as would any archery competition in a national or international environment demand. The only difference is that of the tools, game pitch and spectators. The region with Mukha as a sport has many local champions and excellent marksmen, and has the capacity to produce players of national caliber if not international. These champions are farmers who would put as much as Rs.30,000 (i.e. $300) in a local tournament and that is solely to keep it alive for the generations to come. There is no scarcity of talent in this country, if one wishes to bring some to the forefront.

The stereotypes associated with this region of the country due to excessive security issues, war on terror and mass killings, it is hard to imagine hunting talent here. But we already have examples from this area in the fields of cricket, hockey and squash, where players have marked their places in international community and dominated the world of sports for decades during their illustrious careers. However, it may not be possible unless we turn away from our greed for personal benefits and start thinking about others whose talent demands recognition and that their dreams deserve to become a reality.