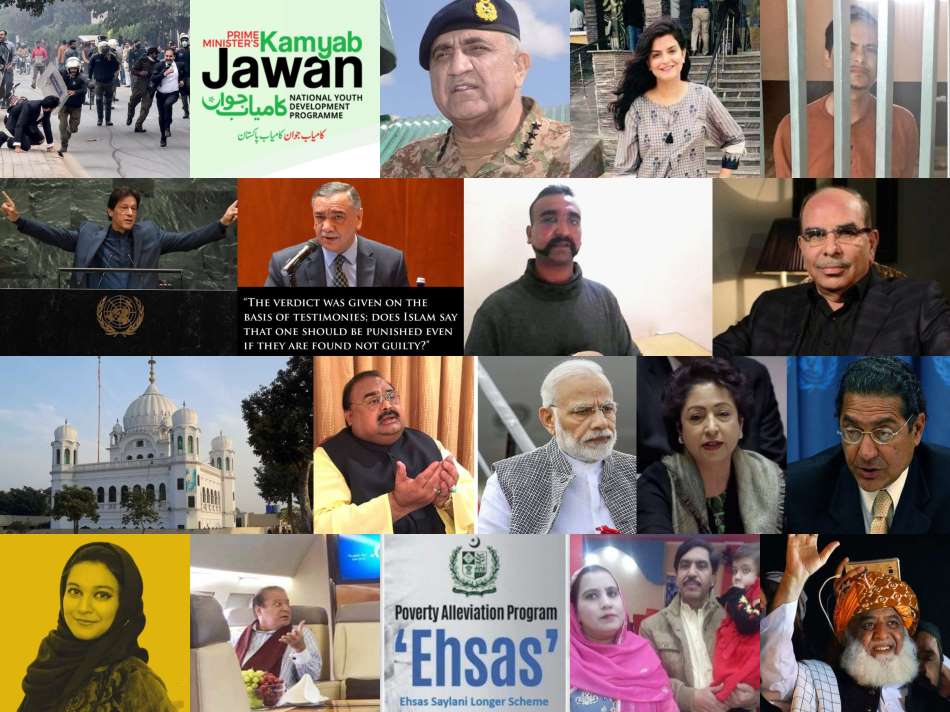 As the year 2019 comes to an end, let’s take a look at the political developments that kept Pakistan talking this year. In no particular order, here they are!

1. India claimed a damaging surgical strike against “terrorist training camps” inside Pakistani territory and Pakistanis had the most savage comebacks.

2. Pakistan captured Indian pilot, Abhinandan who was released after two days of captivity as a peace gesture to deescalate tensions between the nuclear rivals.

3. In August India revoked Article 370 of its Constitution which guaranteed special status to the region of Jammu and Kashmir (J&K) and the entire valley has since been in a state of complete lock-down.

4. The Prime Minister called upon Pakistanis to observe Kashmir Hour in solidarity with the Kashmiri people.

7. PM Imran Khan’s US jalsa was a roaring success & there were many images to prove it.

8. Imran Khan met US President Donald Trump and highlighted the plight of Kashmiris and discussed situations in Afghanistan and Iran.

11. Nawaz Sharif left for London and Pakistanis were dearly divided.

12. Pakistanis rejoiced at the news of Altaf Hussain’s arrest even though it was short-lived.

Read: Changes In The Federal Cabinet: Here Is Everything You Need To Know

18. After a decade behind bars for a crime that she did not commit, Aasia Bibi and her family were finally free to live their life in peace.

20. After 19 years in prison, Wajihul Hassan, a blasphemy convict, was finally acquitted by SC.

24. Pakistanis had all sorts of reactions to General Qamar Javed Bajwa’s extension as COAS.

26. Maulana Fazlur Rehman’s Azadi March was among the most talked about political developments in Pakistan in 2019.

27. CJP Asif Saeed Khosa clapped back at PM Imran Khan & of course it was awkward!

29. PTI government replaced Maleeha Lodhi with Munir Akram who was involved in an alleged domestic violence incident in 2002 in New York.

32. Pakistanis were enraged over Fayaz Chohan’s derogatory remarks against the Hindu Community!

33. Tezgam Tragedy: More than 70 people were confirmed dead and over 40 were injured.

34. But Pakistan moved past the Tezgam tragedy in less than 24 hours after private videos of Rabi Pirzada and Shaheen Afridi were leaked online the next day.

35. The National Crime Agency secured the largest settlement of its kind after business tycoon, Malik Riaz, decided to hand over 190m held in the UK.

37. KP government hired a famous paedophile, Sohail Ayaz, who was imprisoned by the UK police, on a hefty salary.

38. PTI Minister Zartaj Gul was under fire for getting her sister appointed as Director NACTA & Pakistanis were calling out nepotism!

42. Bilawal Bhutto Zardari lamented his party’s loss on social media after the victory of Moazzam Abbasi of Grand Democratic Alliance (GDA) and blamed “other forces” for the humiliating defeat.

43. PM’s Focal Representative on Polio Eradication, Babar Bin Atta, allegedly hid the emergence of new polio cases and the re-emergence of the most damaging, P2 strand of the virus both from the government and international donors.

45. Pakistan Medical and Dental Council (PMDC) was dissolved by President Arif Alvi to pave way for Pakistan Medial Commission (PMC) and the backlash was hasn’t died down.

50. Pakistan became the first country in the world to introduce Typhoid Conjugate Vaccine (TCV) into its routine immunization program.

Did we miss any political developments that had Pakistan talking in 2019? Share them in the comments below!