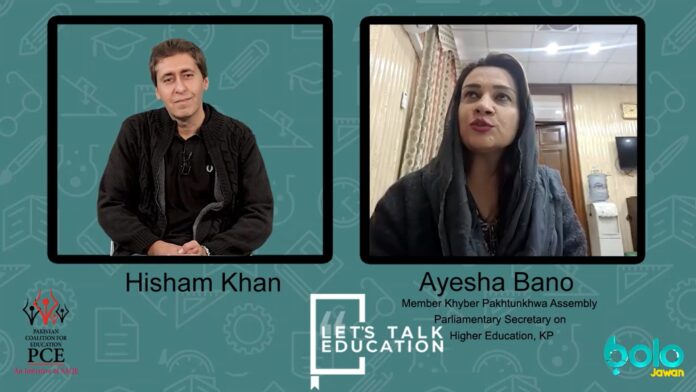 Since having her on board always means receiving the most in-depth responses to questions around social justice issues, we tried to make the most of this opportunity and asked her literally every question regarding Khyber Pakhtunkhwa’s education performance that had been keeping us restless.

For starters, we wanted to know what the provincial government’s current strategy was to bring the 1.8 million out-of-school children in the province into classrooms?

Ayesha jee explained at length the many initiatives that the provincial government has undertaken this year to curtail the number of out-of-school children in the province. These include planning robust enrollment drives, the introduction of double-shifts in schools, and the disbursement of education stipends worth Rs. 2.3 billion for out-of-school children. Since the majority of the OOS children in Khyber Pakhtunkhwa are girls, for this reason, the majority of the students benefitting from the stipend program will also be girls.

We especially loved the provincial government’s initiatives about early childhood education and the setting-up of designated play areas for young learners! The fact that over 900,000 children were enrolled this October during the enrollment period was of course a huge plus!

Missing facilities in schools in schools is a huge issue in Pakistan and among the leading contributors to the country’s disturbingly high drop-out rate. So, it only made sense for us to ask Ayesha jee, about the provincial government’s plan to equip the public schools with basic facilities such as clean water, toilets, boundary walls, and electricity?

Ayesha jee promised that the provincial government was, as they say, on it!

“We’re adopting a phased approach to fully equip schools across the province. A phased approach is the rational way to go about it given the magnitude of the challenge. That said, I’m happy to share that we’ve already met 80 percent of the target that was set for this fiscal year.”

Read: Raja Azam, Education Minister of Gilgit-Baltistan, has Huge Plans For Uplifting The Education Indicators of His Area

Khyber Pakhtunkhwa had recorded extremely healthy increases in its education development budget during the past three years. But this year, to the disappointment of many the province slashed its development budget by a significant 31 percent!

Naturally, we wanted to know what went wrong?

Ayesha jee insisted that the cut in the education development budget was more superficial than most of us believe it to be. “The budget that was diverted from the development chunk has been directed towards the recruitment of new teachers. In the long run, this will address both access and quality issues so, it’s not as bad as one would think. The budget division was a result of a very well thought-through process.”

Let’s Talk Education is brought to you in collaboration with Pakistan Coalition for Education.