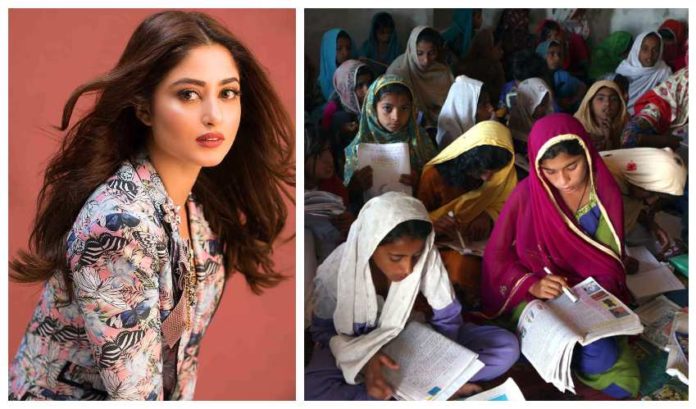 Due to widespread poverty and unemployment caused by the coronavirus pandemic, it is feared that millions of Pakistani children, especially girls, will never return to school again. Under such circumstances, the need for educational investment in Pakistan has increased more than ever before.

Sajal Ali took to social media and posted a video to bring attention of the government officials and the public towards public investment in the education sector in Pakistan.

In her video message, the Yaqeen Ka Safar actress emphasized the need for educational investment across the country especially after the significant increase in poverty and unemployment after the coronavirus pandemic.

She pointed out how emergency situations like COVID-19 often lead to continuous cuts in the education budget for the next 3-5 years.

For example, in the financial year 2005-06, 2.15% of Pakistan’s public expenditure was allocated for education. Following the October 2005 earthquake, public spending on education fell to 1.75% in the fiscal year 2006-07.

But after an emergency, it is not only the overall cut in the education budget that is a cause for concern, but it is also important to keep in mind the specific cuts in the education development budget.

This is especially true considering that even if there is an increase in the education budget, it is almost entirely focused on non-development expenditures such as salaries and administrative costs.

A similar problem is evident in the proposed budget for the fiscal year 2020-2021. Even though all the provinces and the federal government have introduced increases in their educational budgets, this increase can be considered largely superficial as it is almost entirely in terms of non-development expenditures.

The education development budgets – that account for the creation or upgradation of schools, training of teachers and provision of teaching aides in the classrooms – on the other hand have witnessed significant cuts.

Let’s take the case of Balochistan for instance, where the education budget was increased by 13%. However, a closer look reveals that the development budget for education actually saw a significant reduction of 27%!

Also Read: Zainab Abbas Demands The Provision Of WASH Facilities After Reopening Of Schools Across Pakistan During The Pandemic

With integrated policy and planning, Pakistan is actually capable of generating far more revenue than it is currently generating.

This improved national income will not merely accelerate the pace of financial and economic recovery after the COVID-19 emergency but will also allow for greater investment in quality education across the country.

Sajal asked her fans to demand an increase in the education budget in the next fiscal year from government representatives.

This can simply be done by tagging government representatives such as the ministers for education and finance and the social media handles of various relevant government departments demanding prioritization of education financing in Pakistan.

Sajal Ali’s message was part of a campaign run by Pakistan Youth Change Advocates (PYCA) and other civil society organizations working to empower girls through sustained education in Pakistan.