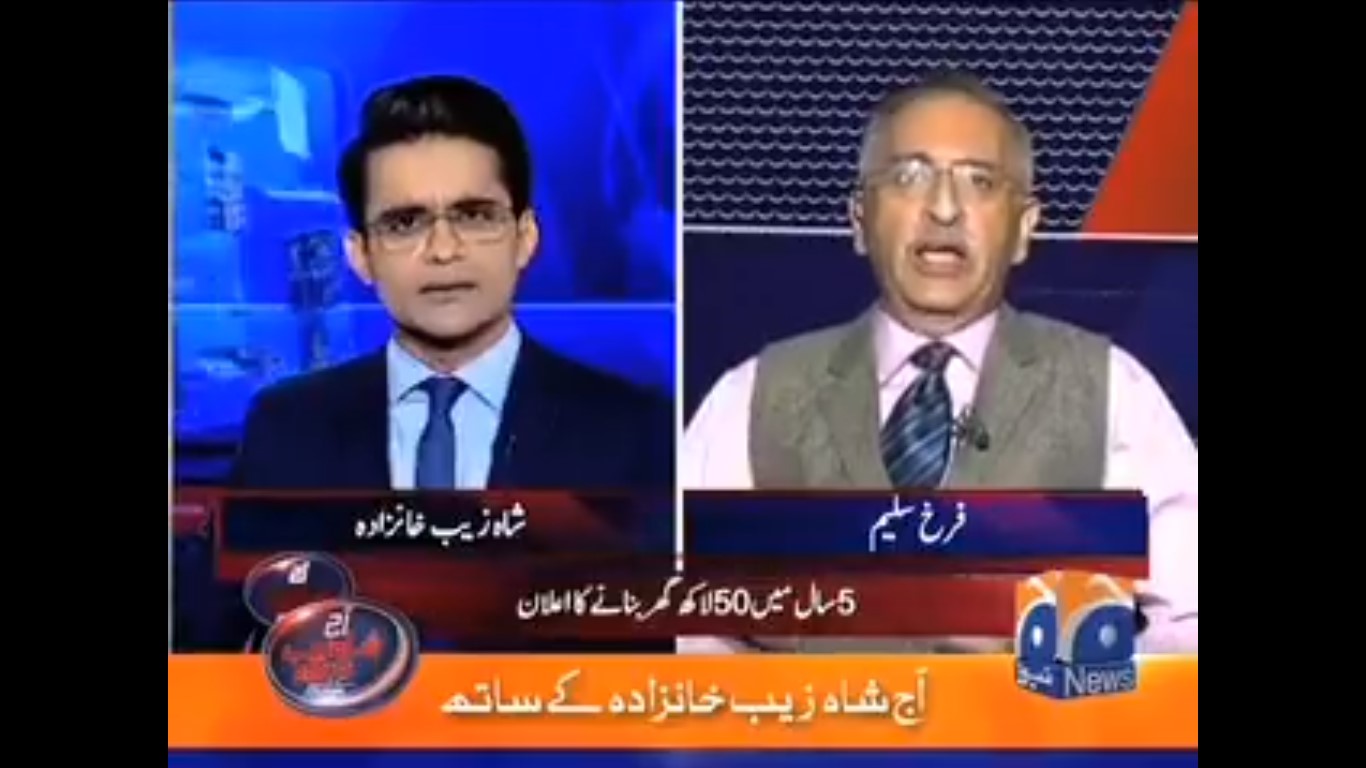 Earlier this week, Minister for Information Fawad Chaudhary had announced the appointment of political scientist, financial analyst and media person, Dr. Farrukh Saleem as the government’s spokesperson on economy and energy issues.

Many had seen Dr. Saleem’s appointment as a move to mitigate the increasing panic among the masses regarding the government’s economic direction and its decision to shake hands with the International Monetary Fund (IMF) for a bail-out. This appointment was also significant in the wake of the (more than) 1,300-point plunge that resulted in the loss of almost Rs. 270 billion worth of capitalization. This was recorded as the biggest single-day loss for Pakistan in a decade.

Read: Economics For Dummies: Why Imran Khan and Asad Umar Have No Choice But To Seek An IMF Bail-Out

It has merely been a few days since Dr. Saleem’s appointment, certainly making it too early to give an opinion on his performance. However going by his first media appearance after assuming his new role, Farrukh Saleem left both friends and foes of the Pakistan Tehreek-i-Insaf (PTI) quite disappointed.

To say the least, Saleem sounded unsure and incoherent throughout the interview, propelling Pakistani Twitter to make scathing comments at his expense.

Really painful watching Farrukh Saleem on Shahzeb Khanzada’s show. After failing to answer basic economic questions on housing finance – now going on and on about corruption. If this is the best economic analysis we have to offer – this is going to be a very painful few years.

According to Farrukh Saleem, The housing scheme can only be successful if the government is able to bring back the laundered money.

So poorly was Farrukh Saleem’s interview received that soon after it ended Pakistanis began questioning his eligibility to hold the position at all…OUCH!

I am appalled at kind of plan that Dr Farrukh Saleem shared with @shazbkhanzdaGEO to finance 5 million House finance project. He couldn’t even share cost of financing. @FawadPTIUpdates can you please share interest rate that a borrower will pay ?

This Farrukh Saleem fella is an idiot of the highest level. Where does Pti find these guys.

Farrukh Saleem is advisor to Govt for economy and he was unable to answer on @shazbkhanzdaGEO show that how 5million houses will be constructed without govt subsidy at interest rate lesser than current policy rate of SBP.🤷‍♂

Expertise of farrukh Saleem were partly exposed by miftah Ismail last night but shahzeb just tore him in parts,he was absolutely clueless on his queries, excellent job done shahzeb khanzada,farrukh Saleem is just latest addition of this govt blunders

Dr. Farrukh Saleem might not even be seven days into his appointment as the spokesperson for economy and energy issues, but many Pakistanis feel that last night’s interview spelled the end of his credibility.

What's the right word for what happened to Farrukh Saleem on @shazbkhanzdaGEO last night?

Embarrassment? Nah, that would imply Dr Wikipedia is capable of being embarrassed.

Expertise of farrukh Saleem were partly exposed by miftah Ismail last night but shahzeb just tore him in parts,he was absolutely clueless on his queries, excellent job done shahzeb khanzada,farrukh Saleem is just latest addition of this govt blunders

and that part when Shahzeb asked him about KP ehtesab commision and the impenidng NAB inquiry into its dealing and Farrukh Saleem started with 'hum ne KP mn 3 chezain ki hai, aik sarkari school behter kie' Thankfull Khanzada cut him off there. He was in tatters.

The guest on the show is being trolled for incompetence but the show’s host, Shahzeb Khanzada won new fans overnight.

Just saw this! Having been in mortgage industry, it was painful every time Farrukh Saleem spoke. Very happy with Shahzeb's questions and understanding. If the economic plan is half as good as tge spokesperson, only God can help us.

During the conversation between Farrukh Saleem and Shahzaib Khanzada, it feels like that Shahzaib is the economist. Seems to know more. Watch from 10-minute point.https://t.co/kaKbu5inkD

As one Twitterati put it, Dr. Farrukh Saleem will remember his interview with Shahzeb Khanzada for a long, long time to come.

Farrukh Saleem sounds like someone who prepared for a Pakistan Studies exam but found out the next day that it was a Chemistry viva.