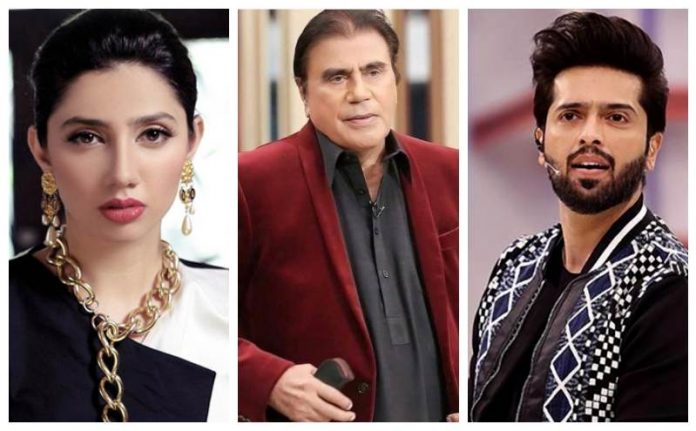 The pioneer of game shows in Pakistan, the Neelam Ghar host entertained not just one but many generations of Pakistanis.

The 84-year-old was an asset to the entertainment industry and was also awarded with the Pride of Performance Award for his services.

Pakistani celebrities are paying tribute to Tariq Aziz as they mourn the loss of the undisputed king of Pakistani game shows!

Sharing the clip of his announcement as PTV started its transmission, Mahira Khan wrote that the country was indebted to Tariq Aziz.

Osman Khalid But remembered him from the iconic era of PTV that most Gen X-ers and older millennials grew up watching.

Mawra Hocane quoted his famous dialogue to honour the legend.

Fahad Mustafa and Bilal Ashraf expressed their sense of loss.

Imran Abbas wrote a heartfelt note remembering the legend for always making us feel connected to our past.

“Dekhti aankhon suntay kaano” .. aaj jese Pakistan Tv ke sir se kisi buzurg ka saaya uth gaya. A few faces make us feel as if the time stands still, their presence makes us belief that still we have a connection to our past, they are the reminiscences of timelessness, like moon, sun and fragrances attached to flowers. The legend, the institution, the trendsetter, an era in himself, the poet, the undisputed king of gameshows , the inaugral voice of PTV, Tariq Aziz Sahab was certainly one of them who made us believe that still we have affinity with rapidly blurring hues and fading colours of yesterday. R.i.P Sir!!! Aap jesa koi ab koi nahi aaye ga. “Hum wo syaah bakht hain tariq ke sheher mein .. Kholain dukaan kafan ki to sub merna chhor den”. Inna Lillahe Wa Inna Elehe Rajeoon.

Saba Qamar and Mansha Pasha spoke all our minds! Another day, another loss…that’s just how 2020 has been so far…

Vasay Chaudhry recalled the time he had invited Aziz as a guest and had asked the legendary host to open his show.

Amen to that Zara! Neelam Ghar still has no parallel!

Ushna Shah sent her condolences to his friends and family.

Shaan Shahid among many others also paid tribute to the departed soul.