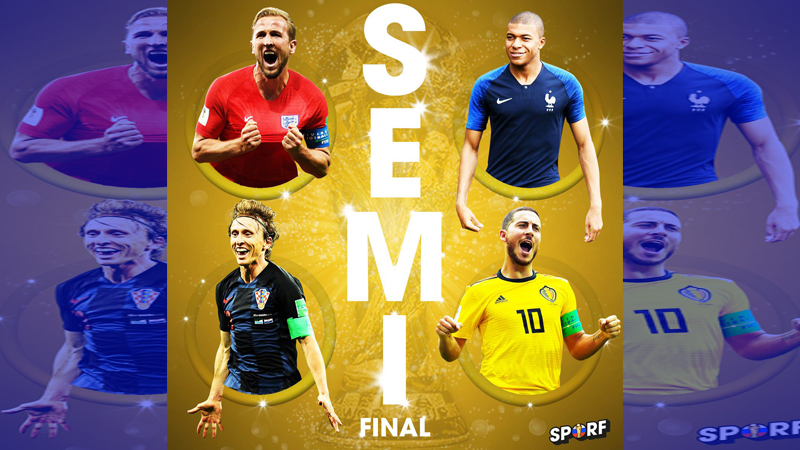 The finale of FIFA World Cup 2018 is just around the corner and in a couple of days we’ll get to know who will fight the last battle for the coveted trophy. The situation of do or die has well arrived in the tournament and here we review how the 2 semi finals look like at FIFA World Cup 2018!

The two undefeated teams of the competition, France and Belgium, will face each other in an invigorating semi final. Both the teams have been playing their A game throughout the competition and deserve to be in the semi finals.

The French side has so far played exceptionally well, knocking Argentina and Uruguay out from the competition in the previous rounds. Griezmann and Mbappe upfront; Kante and Pogba in the mid; Umtiti and Varane at the back; you name it! The entire team of Les Bleus has been in a great form since day 1 of the World Cup and are yet to lose a game in this run up. The Euro finalists of 2016 will be looking to continue the winning streak in the competition to secure a spot in the finale.

The Red Devils will be coming to this game in high spirits after knocking out the hot favorites Brazil cogently in the quarter final. The Belgium side has won every single game they have played so far in this tournament. Roberto Martinez’ tactics have been spot on in the mega event, while the superstars Eden Hazard, Kevin De Bruyne, Lukaku and Witsel all have contributed significantly to the team. This is undoubtedly the best squad of Belgium in years and the golden generation will be keen to win the match and reach finals.

Only time will tell how things will pan out between these two young and energetic teams!

Croatia and England, the two underdogs of the European origin have turned this competition in their favor in a formidable manner. Both the teams have played every game resolutely and their efforts paid off in the shape of a semi final qualification.

The Croatian team has been the dark horse of FIFA World Cup 2018, thrashing up whichever opponent comes their way. The perfectly balanced Croatian squad’s potential has been maximized by Dalic’s tactics in the World Cup. The side has richly enjoyed success with the likes of Modric, Rakitic, Perisic, Mandzukic and Vida. Goalkeeper Subasic has been top grade for his team, giving his side spectacular saves at penalty shootouts in the last 2 games. It will be a first for Croatia if they reach the finals and this team will be all geared up to make history on the grandest stage.

Read: Top 5 Teams That Have The Potential To Win FIFA World Cup 2018

The mega event has turned out to be unbelievable for the three lions and the fans have now actually started saying that it is coming home. Gareth Southgate has turned this team into a top level side, hungry to win. Kane’s extra ordinary leadership has added a killing flare to this team with Sterling, Dele Alli, Henderson, Maguire, Walker, and Pickford all showing decent displays in Russia. The desperation to get their hands on the golden trophy is very high as this is the closest England has ever come to become Champions since 1990.

In a nutshell, it’s another intriguing fixture which has no favorite but whoever goes through, history will be made!

Read: Here Is A Recap Of The Thrilling Knockout Round Of FIFA World Cup 2018!