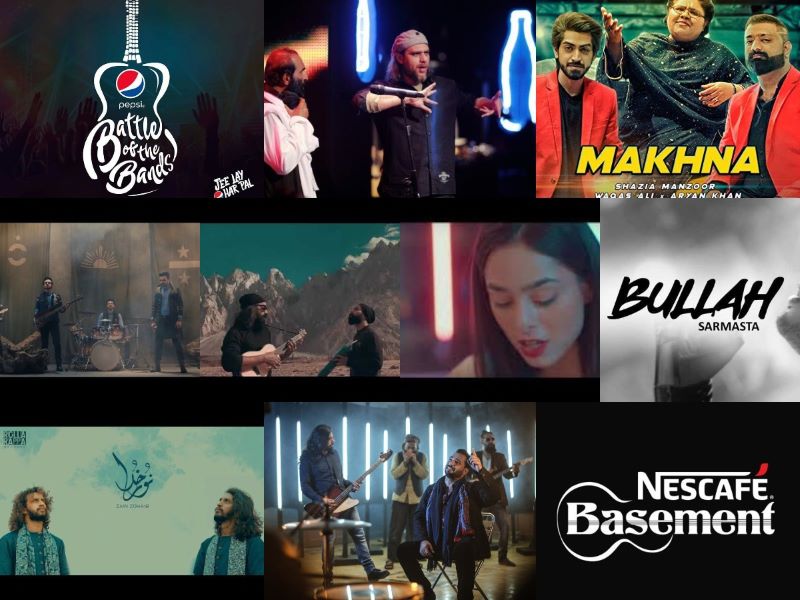 For the past couple of years, Pakistani music industry has been on a course of rejuvenating itself and 2019 didn’t prove to be any different. While the commercial shows yet again proved to be a great platform for the promotion of our industry, various artists and bands kept on providing us new music to groove to.

And now that the year is coming to an end, I decided to look at the top tracks which were played on repeat in our playlists.

If you’re the kind of person who jams on OST’s and dance numbers from movies then look away now, this list isn’t for you!

Here are 10 Pakistani music moments of 2019 which left us craving for more:

1. Pepsi Battle of the Bands

The 4th installment of Pepsi Battle of the Bands, like every other season, did not disappoint at all.

Gohar Mumtaz took us back in time with Dil Harey, so Strings decided to turn back the clocks with Zinda. The performances which stood out from this season were Aik Nai Subh by Black Hour, Raat by Auj and Dhaltay Rehna by Kashmir & Bayaan.

Nescafe Basement might just have pipped Coke Studio to the crown this year.

Basement came out with hit after hit in this season and I’m not really sure if I want to leave any of the tracks out of this list.

With the return of Rohail Hyatt as the producer of Coke Studio, expectations were really high and I wouldn’t be wrong to say that Rohail delivered on our expectations. Even though he might’ve taken the safer and calculated route thanks to commercialization, the songs were still quite pleasing.

The top tracks from this season for me were, Wohi Khuda Hai by Atif Aslam, Gulon Mein Rang by Ali Sethi, Daachi Waaliya by Hadiqa Kiani and Mubarak Mubarak by Banur’s Band & Atif Aslam.

Apart from these TV shows, the following musical releases of 2019 were a class apart from all others.

Read: Coke Studio 12 Is Rohail Hyatt’s Most Laid Back Effort To Date & Yet It Still Shines

The winners of season 3 of Battle of the Bands, Bayyan came out strong in the start of this year with their studio version of Hum Nadaan. They first performed this song on BoB but with this studio version, they took it up a notch.

This Karachi based classic alternative-rock might just be one of the most underrated groups of Pakistan. Their fusion of Sufism with Alt Rock is a thing of beauty and their new release, Ishq Kamaal is one of their finest works.

Read: This Pakistani Music Quiz Will Prove If You’re A Know-It-All!

We have to again thank Battle of the Bands for bringing us this hidden gem last year. Sarmasta rocked our TV screens and filled our hearts with unassailable beats in 2018. Sarmasta came out strong this year with their rendition of Bullah and proved that they’re in this business to stay.

If you haven’t heard any of Zain Zohaib’s qawalis before then start with Noor e Khuda and I promise you that this young prodigy will slide right into your list of favorite artists.

Read: Aleem Zafar Covers Junaid Jamshed’s “Ilahi” & Here’s What I Have To Say About It

This raw creation of Asrar, in the middle of nowhere, is the epitome of beauty and serenity. That dude just pulled out his mobile phone and recorded a melody in such a delicate way that it blew my mind. I don’t have to say anything about this, just listen to it if you haven’t already.

Waqas Ali took all of us back to our memorable family weddings and dholkis. Teaming up with Shazia Manzoor and Aryan Khan he definitely struck a chord! The revival of this classic shadi song is sure to pump the speakers up at every upcoming wedding.

Even though this came out on the 31st of December, 2018, I couldn’t keep myself from including this in my list.

This band of 5 women from various fields of life had gotten big in the beginning of last year but they ended 2018 on such a high note with this mashup that they’ve cemented their place in at least my heart as favorites!