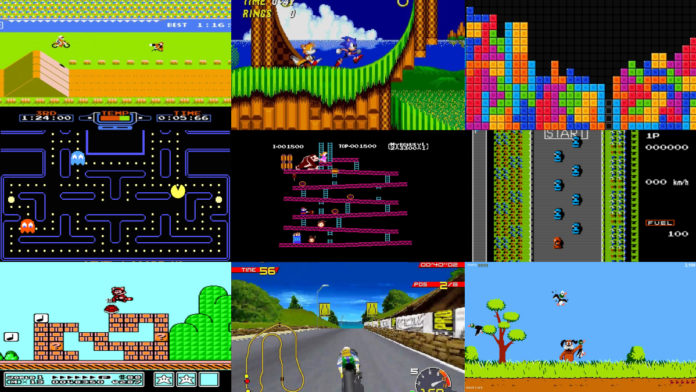 We live in a golden age and have an extraordinary array of interactive experiences for every taste. However, for the simpler days of the arcade period, it’s hard to pick the best retro games. These amazing 8-bit and 16-bit video games have made our childhood amazing.

It doesn’t matter how old you are, the greatest game ever made is Super Mario Bros. 3. It’s a fact. It was the absolute peak of video game technology in the 1980s. There was nothing else close by.

I could not believe if you said you haven’t played Tetris. This game was just everyone’s favorite way of passing time. Moving blocks around and fitting them in the perfect place is just satisfying.

Mario Kart is my personal favorite classic game. Playing this game for hours felt like a few minutes. This game has really aged well, with its classic graphics and fun gameplay.

Sega’s spiny speed merchant proved to be a worthy rival to Nintendo’s Mario with his Mega Drive debut. Yet it was the spectacular loops, the corkscrews, and the clever environmental tricks in the follow-up that proved that his makers carried the same swagger.

This game was legendary at it’s time, with it’s easy to play and hard to master gameplay. People got addicted to it really quick. One of the most well known games on this planet.

Duck Hunt was just ahead of its time. I still couldn’t wrap around my head the fact that my gun killed the ducks and the weirder fact was that it was surprisingly very accurate. First Person Shooting games have many factors now like, bullet drop and the gun type. This game has none of that, you aim, you kill.

The yellow gobbler is here to eat some dots. This game had something very amazing about it. You could never predict how the ghosts worked and it was Game Over if you got surrounded by those blood thirsty creatures.

Is anyone else feeling something, I will tell you what that is, Its NOSTALGIA. This game just hit different, the physics of this game is out of this world. And the many things you had to keep an eye out for, got frustrating sometimes.

Just let the Nostalgia sink in. This game was very addicting, the goal was to reach the finish line within the stages without running out of time, hitting other cars or running out of fuel. I still couldn’t get past the first level and who else remembers the superhero flying next to you when you are doing good in the race.

This game just made you feel evil, kicking those poor bikers out of your way. The fast paced gameplay was a great way to get your adrenaline rushing and the sharp turns got annoying sometimes.

If You Haven’t Tried These 10 Mobile Games, You Don’t Know What Fun Is

5 Things You Need To Know About Fearless and United Guards Mobile Game A.K.A. FAU-G