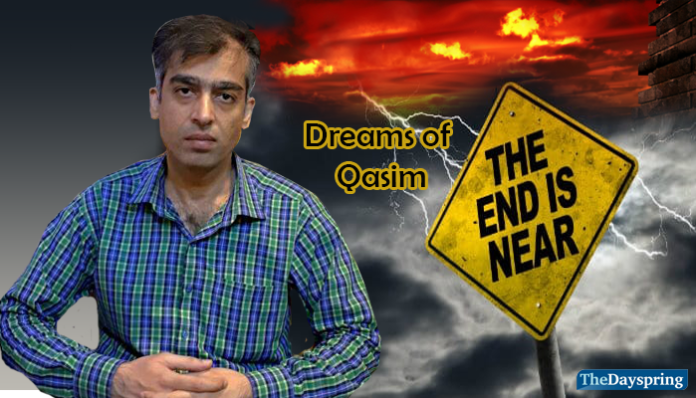 Pakistani Twitter has been abuzz for the last few months thanks to one, Muhammad Qasim and his sensational, regime toppling dreams.

Now Qasim should not be confused with the prolific Muslim military commander Muhammad bin Qasim – unless the great Muslim warrior has seen a rebirth complete with a Twitter handle and all!

Qasim is actually a self-proclaimed psychic who has been claiming to see the Holy Prophet (S.A.W) in his dreams for the last 28 years and decided to speak-up about his experiences some two years ago.

And while his “miraculous dreams” did not earn him much traction in the past, during the last 24 hours, Muhammad Qasim has finally managed to become a national trend.

With over 17,000 tweets under the hashtag, #Qasim_Dreams_About_PMIK sent out today alone, a cursory search gives away the fact that this trend is not organic but being prorogated by a well-coordinated group of Twitter handles that seem to have been setup with the sole purpose of pushing Qasim’s narrative.

So, who really his Muhammad Qasim?

The bio on his website, http://divinedreams.co/ – albeit with a few grammatical errors – states:

“Muhammad Qasim ibne Abdul karim is a Muslim who has been seeing Rasul Allah saw in various dreams. His dreams are related to, but not limited to, Geo Politics, Signs of Qiyamah, Doomsday, Rise of Islam, Peace in the World, Isa a.s, Yajuj Majuj (Gog Magog) and Dajjal.”

The wannabe Muslim visionary also found an audience on a local television channel recently where he spoke of his dreams predicting a major regime change in Pakistan.

In an interview to Royal News TV, Qasim claimed that the Prophet Muhammad (S.A.W) visited the Army Chief in is dream and affirmed that the dreams of Qasim were true.

According to Qasim, after this affirmation, he saw the Army Chief coming into power for a short period to establish a new Islamic government and later stepping down, paving way for a new system of governance that helped Pakistan prosper at an unprecedented pace.

So basically, Qasim, who had technically been instigating state institutions to topple the civilian government on the pretext of his unsubstantiated dreams not merely managed to set-up a lucrative troll farm of Twitter handles to promote himself but an established TV channel also decided to give him a much wider audience to propagate his unfounded claims…Why am I not surprised?

In another video, posted only today, claims made by Qasim are reiterated.

The narrative follows the same stream of thought: Imran Khan will fail, Army will assume power and establish an Islamic presidential system, which will not be through popular vote.

Qasim also talks about the infamous Ghazwa-e-Hind in this video where he predicts initially the victory of Pakistan over India and later – and I swear I’m not making this up – over USA and Russia.

Before you give Qasim any credit, please remember that the phenomenon of Ghazwa-e-Hind was first popularized by Zaid Hamid some 10 years ago!

Here’s a blast from the past to refresh your memory 👇

So is Muhammad Qasim an old wine in a new bottle?

Because let’s be honest, much of what he is saying has already been peddled over the years by those who wish to undermine civilian governments in Pakistan.

What is disturbing is that Qasim – like his predecessors – has found his way into the national discourse through TV and social media.

Although his account has been suspended by Twitter for violating the micro-blogging website’s terms and conditions but numerous fan accounts have popped up almost simultaneously to propagate Qasim’s narrative.

If these were the ramblings of a lone individual one should not pay much heed but now as it clear that there is a coordinated campaign supporting Qasim’s cause.

I can’t believe this has to be said but the law enforcement agencies must take action under the Cyber Crime Law against Muhammad Qasim for attempting to instigate chaos, slandering state institutions and generally, for being a sorry excuse for a human being!