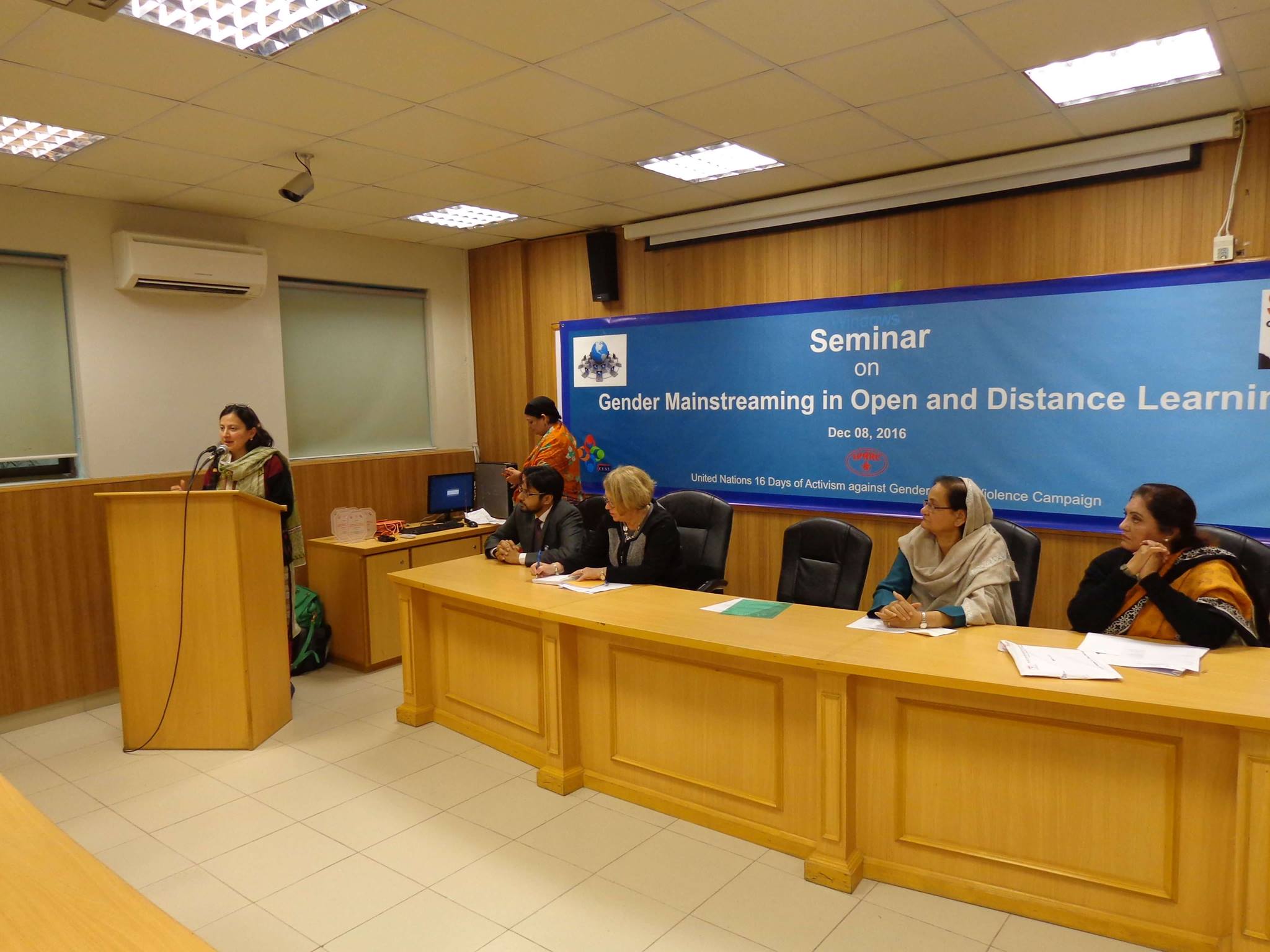 On 8th, Dec, 2016 SPARC (Society for the Protection of the Rights of the Child) in collaboration with CUST (Capital University of Science and Technology) conducted a seminar on Gender Mainstreaming in Open and Distance Learning. The seminar was held to celebrate 16 days of activism, and to raise awareness among the youth regarding different implications for gender equality, and gender based violence for planned policy action, including legislation, and educational programmes, as well as to promote active participation of women and girls in open and distant learning. Another major point of discussion during the seminar was early and forced child marriages, and its implications, especially for the girl child.

According to various figures from national and international organizations, it is estimated that around 21% of girls in Pakistan get married before their 18th birthday and 8% of adolescent married women are already mothers between the ages of 15-19. Furthermore, among the estimated 25 million out of school children in Pakistan (aged 5-16 years); more girls than boys make up more than half of all the out-of-school children in the country. The event aimed to highlight gender based disparities in the education sector, and to emphasize the need for gender mainstreaming in open and distant learning, since girls across the country find it harder to go to school due to various social-economic issues; whereas open and distant learning can help fill this gap.

Sadia Hussain (Executive Director of SPARC) started the seminar with an opening note and elaborated upon the need for gender equality in open and distant learning to promote women empowerment, and to counter socio-economic inequality plaguing girls and women in Pakistan. She spoke about early and forced child marriages, and the plethora of problems girls face in educational institutes across Pakistan, including; sexual harassment, social pressures that prevent them from going to or dropping out of school, as well as the lack of educational institutes that can cater for their needs. She also proposed solutions regarding the aforementioned, including the promotion of distant learning and reaching out to students in universities like CUST to come up with innovative solutions to meet the ever growing needs of imparting education to girls and women.

Prof. Dr. Haroona Jatoi presented a situation analysis on early and forced child marriages and its implications on girls. Frances Ferreira, (Senior Advisor Gender, Commonwealth of Learning), contributed to the discussion via video message in which she talked about the need for gender equality as an integral element for policies, plans, and programmes. She explained that the Commonwealth of Learning (COL) recognizes that advancing the goals of both women empowerment and gender equality are central for sustainable development. She further pointed out that when girls and women are educated, it expands their opportunities beyond their homes, leading to gender equality, women empowerment, and raising the standard of living of women in-general.

Dr. Abdul Baseer Qazi, Assistant Professor, CUST, applauded the efforts of SPARC for promoting gender equality, and women empowerment through their various projects, as well as the special role that SPARC has been playing for the promotion of child rights over the past many years. He also talked about the CUST initiative to involve students in voluntary work, with reference to the recent MOU signed with SPARC for a joint collaboration for engaging students in voluntary endeavors. He spoke of VIS (Volunteers in Service), which is an endeavor by CUST to engage students in 65 hours of mandatory voluntary service before they can acquire their degree.

The Vice Chancellor of Capital University, Prof. Dr. Mohammad Mansoor ended the seminar with concluding remarks and a vote of thanks to all participants the Chief Guest and other Guests of Honor.