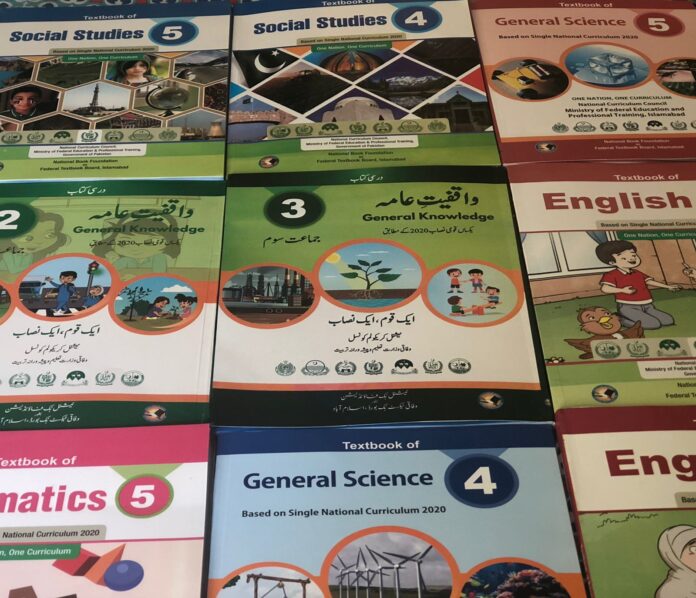 More than anything else in Pakistani cyberspace, the last couple of weeks have been about relentlessly debating the newly-launched Single National Curriculum (SNC).

People on both sides of the great divide have put forth some excellent arguments; won very many retweets and braved their fair share of ghaleez galiyaan.

Here, see exhibits A and B for yourself if you’ve only just begun to catch up with the intensity of the battle that has wholly consumed Pakistani Twitter.

And while the efforts of the good warriors on both sides, I’m sure are well-intentioned 🙄, the cherry-picking of facts has really not helped either cause.

I mean, against age-old counsel, when people quite literally start judging a book by its cover, there’s good reason to be skeptical.

There’s equally good reason to be skeptical when most proponents of the SNC only have a handful of images from the textbooks to plead their case.

Confused, you say? Oh, darling, you have no idea!

So, after a sufficiently wholesome spell of procrastination and once the good warriors had left me with an adequate amount of confusion, it was finally time to do the needful: read the new SNC textbooks for myself!

And read I did. From English and Math to General Knowledge and Social Studies, there was no page I wanted to leave unturned.

After all, was my kid going to be taught misogyny and hate or was he finally going to learn respect and reverence for the world and the diversity around him?

Mama needed answers and she was happy going down the geeky rabbit hole to find them!

And – (do sue me for beginning yet another paragraph with an “and”) – what is it that I found? Well, you’d be bored out of your minds if I embarked on a 500-word rant based on my observations of the SNC textbooks so, let me illustrate my take with a series of pictures; they are worth a thousand words after all.

The textbook writers seemed to be on an overcorrection to finally make right decades of religious and ethnic hatred propagated through past curriculums.

On the whole, as far as the religious diversity bit goes, the effort is genuinely heartening – at times a tad patronizing but there’s no reason to scoff.

I mean sure, it would’ve been nicer to see Holi, Besakhi, and Christmas get equal space and it wouldn’t have hurt to mention Easter and Diwali as well. But against the benchmark of outright nafrat set by the previous textbooks, this effort is certainly a step in the right direction.

In the coming editions, perhaps Harjeet or Anjali could be the protagonists in this 👇 passage, and Hassan could be the sidekick.

More importantly – and not “perhaps” but surely(!) – the next edition must teach our children to have ehtram for not just masaajid but also mandirs, churches, and gurdawaras. Using ehtram for the former and lehaz for the latter places of worship is plain discriminatory and needs immediate correction.

BUT at the same time, when did we last see a textbook come with conspicuous instructions to “…not compel” children from other religions to study chapters with Islamic content?

I mean for the love of Allah(!) we need to stop with this madness already and it’s good to see that we’re finally making a written effort to do so.

I’ll start with what works.

The many wonderful ways in which girls and women are depicted in the textbooks work really well. There are girls in all sorts of attires, doing all sorts of activities that I’m sure will likely help our children to internalize that the sex of a person does not and cannot define their capabilities.

Of course, normalizing girls to aspire beyond conventional gender roles is only one side of the concern. The other side is to help boys understand that they too, can and should, take up chores that, in the popular narrative, have forever been assigned to girls and women.

So it would be really nice to see Jamal, instead of Jameela cook in the next edition.

It would also be great if girls and boys could be given a 50-50 representation in illustrations. My very rough estimate after going through the SNC textbooks would conclude a 3:1 ratio, i.e., for every three illustrations with boys, there is one featuring a girl. Wouldn’t hurt to have a half and half representation.

Since we’ve come such a long way in terms of formulating some very well-thought-through laws and policies for transgender people, this might just be the right moment in our evolution to also acknowledge the existence of the third gender in our textbooks and give it the respect that it deserves.

On the whole I liked the lay-out of the Science books.

They seem to cover essential topics, are current in terms of their content, the chapters are sufficiently illustrated and accompanied by a whole host of hands-on activities to keep the kids engaged.

The same is true for topics covering climate change. There’s a lot of content that is designed to gradually build children’s understanding of global warming and how they can each contribute towards protecting Mother Earth.

My two pence here would be to supplement each chapter with a box introducing a scientist who made significant contribution in the field that the chapter strives to tackle. It would be nice for our children to learn not merely the mechanics of how the world works but also about the minds that made those discoveries or harnessed those discoveries to invent.

Inclusion of such sections would also be an excellent way to educate our children about the contributions of women in Science. So, where they’ll learn about the Einsteins and Stephen Hawkings of the world, they will finally also get an opportunity to acquaint themselves with Marie Curie and Margaret Hamilton.

Here is an excellent series of posters by the Pakistani social enterprise, ScienceFuse to give the textbook writers a few leads.

Are the Single National Curriculum textbooks perfect? No.

Are they an improvement on the nonsense we’ve taught for the last three decades? Most certainly.

Do we finally have something we can together build on? I’d say so.

Have an opinion on the Single National Curriculum? Share it in the comments below!