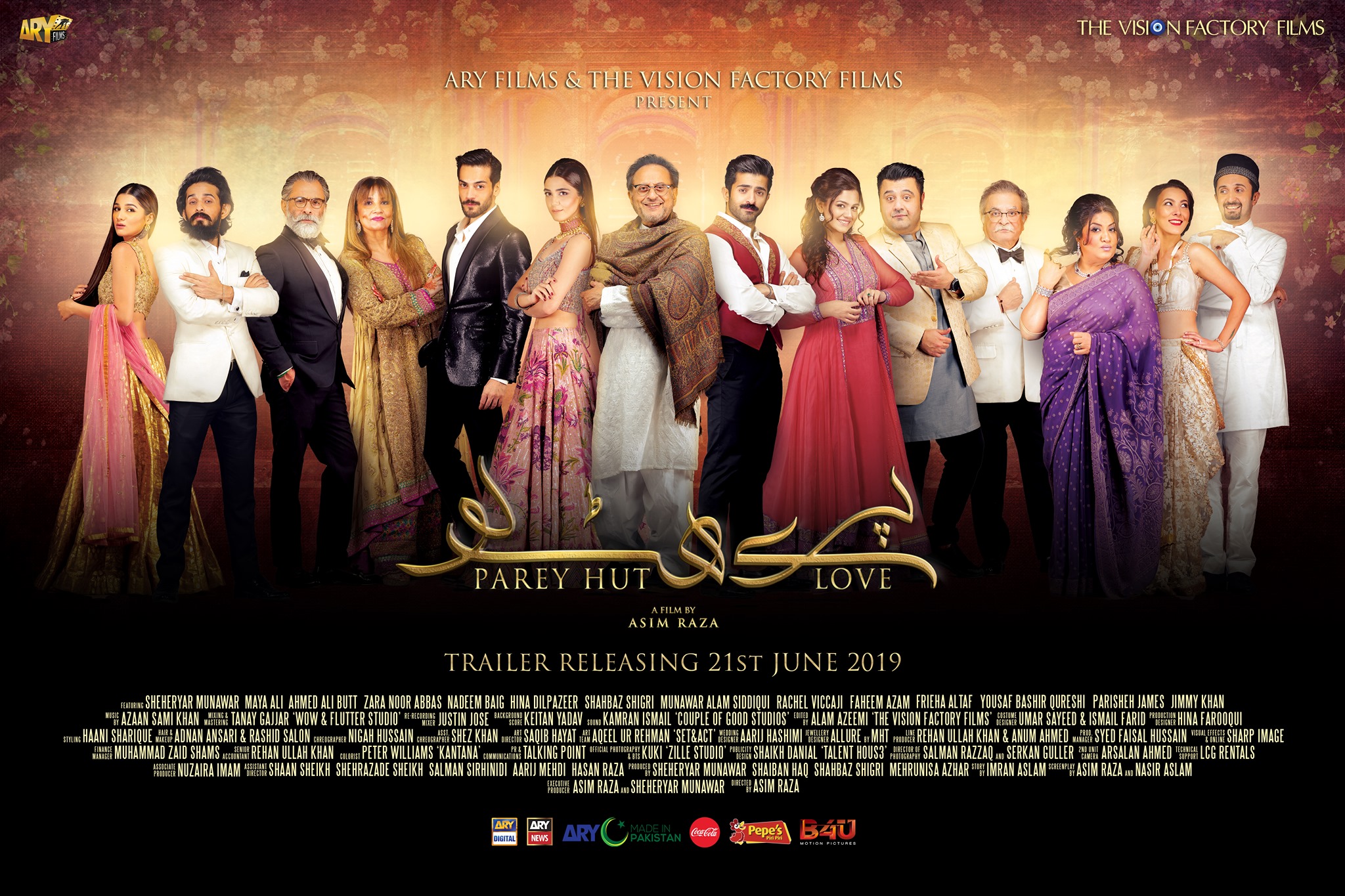 Parey Hut Love, revolves around an aspiring actor, Sheheryar (played by Sheheryar Munawar) who has a phobia of commitment and a strong willed expat, Saniya (played by Maya Ali) who meet and fall in love over a series of unplanned encounters at destination weddings.

The movie, which is mostly shot in Karachi, Islamabad and Europe, benefits enormously from its three core strengths: stunning visuals, mesmerizing music and Sheheryar Munawar’s performance.

Music Lies at the Heart of Parey Hut Love

Let’s break the conventional rules of reviewing a film and start with its soundtrack.

As far as the music is concerned, the talented Azaan Sami Khan deserves two thumbs up! In my opinion, Haye Dil is the most melodious track of the year and the fact that it has been shot beautifully adds to the experience. If there are any Sonia Jehan fans out there, believe me you won’t be disappointed!

The second song is Ek Pal where Meera ji makes a cameo appearance, completely owning the screen. Then there is a love ballad, Behka Na sung by Ali Tariq and Harshdeep.

Morey Saiyan sung by the melodious Zebunissa Bangash – is not only soothing to the ears but it is also a visual treat for audiences as it features Mahira Khan. The production design complimented by the Amrao-Jan-adda styled classical dance and stunning costumes sets new standards for others to follow.

Then Rahat Fateh Ali Khan sings a harmonious Qawaali Zihal-e-miskin (originally composed by Nusrat Fateh Ali Khan) – the qawwali talks about heartbreak and gels in very well with the flow of the film.

Finally, Azaan composes an upbeat track Balma Bahgora sung by the talented, Aima Baig that will compel you to tap along.

And Now a Word about the Performances

The film belongs to Sheheryar Munawar who has given a stellar performance that keeps you invested in the film throughout its over two-hour run. He has certainly grown as an actor and I would say that after this movie he has landed himself in the A-list.

Maya Ali has also given a noteworthy performance but I feel she needs to up the ante during comedy sequences. However, as far as her dramatic scenes are concerned, dude she is a PRO!

The film also stars Ahmad Ali Butt, Zara Noor Abbas and Hina Dilpazeer – all three have done justice with their comic roles. One of the biggest names in Lollywood, Sir Nadeem Baig, gives yet again a powerful performance that will stay with you much after the film has ended.

Read: A 14-Year-Old Saw Mahira Khan’s Superstar Trailer & This Is His Review

There are other supporting actors like the new kid on the block, Shahbaz Shigri – who I observed has improved his Urdu a lot since his Slackistan days. Rachel Viccaji, Jimmy Khan, Faheem Azam and Frieha Altaf are also allocated some screen time.

What Could Have Been Done Better?

The only flaw I observed in PHL was the screen time that Sheheryar and Saniya’s relationship received exclusively. There were too many characters with their own sub-arcs, taking away significantly from the lead couple’s one-on-one moments.

I wouldn’t recommend that you watch PHL hoping to see a unique script pan out on 70mm, as it’s a rom-com. At the same time, a word of caution for those who are into Bollywood masala movies: this is not your cup of tea.