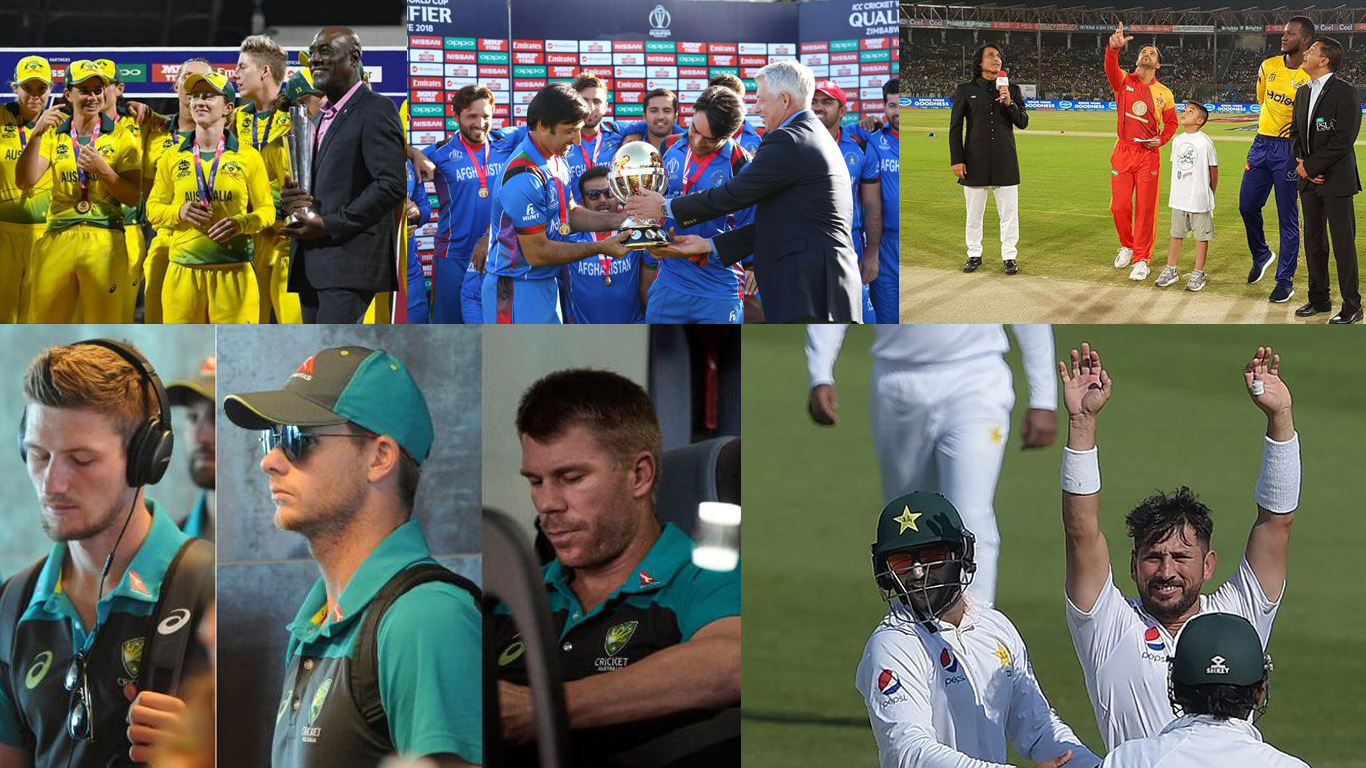 As the year 2018 comes to an end, here is a look at major events and developments from the world of cricket in pictures.

Australia began the year with an outstanding performance at Sydney that allowed them a 4-0 Ashes victory over arch-rivals England.

Pakistan, on the other hand, had a disastrous start to the year. The green shirts lost the One day International (ODI) series during their tour to New Zealand, 5-0.

The year saw India winning its fourth Under-19 world cup title; the most by any side.

India beat Proteas in the ODI series to win their first bilateral series in any format while touring South Africa.

Nidahas Trophy saw the rivalry between Bangladesh and Sri Lanka rise to an unprecedented level. Both sides got themselves involved in bizarre “nagin dance” and “pungi” celebrations that made on-field atmosphere look extremely ugly. Leaving both participants behind, India eventually, claimed victory in the final of the T20 tri-series.

Read: WrapUp2018: 5 Pakistani Music Moments That Had Us All Asking For More!

South African quick, Morne Morkel retired from international cricket at the end of the series against Australia.

International cricket returned to Karachi during the final of PSL 3. The day saw Islamabad United beat Peshawar Zalmi to win their second title in 3 years.

Read: #WrapUp2018: 10 Pakistani Films That Made 2018 The Most Profitable Year In Lollywood’s History

Ireland made their Test debut against Pakistan at Malahide. Pakistan won the closely contested game.

CSK returned from a two-year ban to win the IPL trophy for the third time.

New Zealand women score 491 runs to register the highest team total ever in an ODI.

Minnows Scotland staged an upset when they won an ODI against England by 6 runs.

Read: Lollywood Has An Impressive Line-up Of Films Slated For 2019

Afghanistan made a forgetful debut against India, losing their first Test by an inning and 262 runs.

Openers Fakhar Zaman & Imam-ul-Haq featured in a record-breaking 306 runs opening partnership during the fourth ODI against Zimbabwe. Fakhar Zaman also managed to become the first Pakistani to register a double hundred in an ODI during the game.

Ben Stokes received a huge relief when he was found not guilty of affray after the infamous Bristol nightclub incident.

Former England Captain, Alastair Cook also retired from international cricket during the fifth and the last Test against India at Oval.

The England-India series also saw Jimmy Anderson taking over from Glen McGrath as the most successful fast bowler ever when the pacer claimed his 564th wicket.

Australian women lifted the World T20 title for the fourth time in the history of the tournament.

Former ODI skipper, Azhar Ali while giving up on the format called it a day from ODI cricket.

Ragana Hearth too retired from international as the most successful left-arm spinner ever with 433 Test wickets.

Pakistan won 3-0 against the Kiwis in UAE during the T20 series. Babar Azam then, during the final T20 became the quickest to reach 1000 runs in the format. The victory also ensured that Pakistan would enter the new year as the world’s top-ranked side in the shortest format of the game.

Yasir Shah broke an 82-year-old record when he became the quickest to take 200 Test wickets.

Read: Why Sarfaraz Ahmed Is On The Brink Of Losing Test Captaincy

A series of dismal performances made way for M. Hafeez’s retirement from Test cricket.

New Zealand won their first away Test series against Pakistan since 1969.