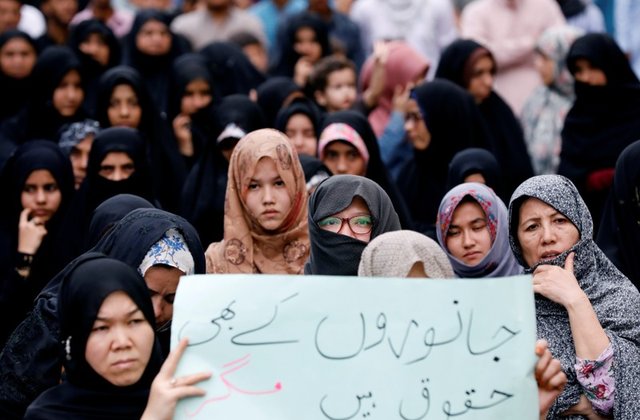 The year is 2013. Twin blasts on Quetta’s Alamdar Road have taken the lives of over 80 innocent Hazara shias. The loved ones of the departed take to the streets, refusing to bury the martyred. They brave January’s icy cold weather and sit under the open sky as it rains on them, demanding protection for their community that has been the target of unabated terrorist attacks for several years. After more than 24 hours of media blackout, heart-breaking images of the protest go viral on social media, forcing men, women and children across the country to step out of their comfort zones, demanding justice for their Hazara brethren. The government is finally forced to take action and Prime Minister Raja Pervez Ashraf lands in Quetta after more than 72 hours of the tragedy to negotiate an end to the sit-in.

It has been six years to that fateful week and for a moment there, Pakistan had begun to breathe easy under the illusion that the dark years of targeted attacks on the Hazara shias were a matter of the past.

Read: Lessons We Can Learn From New Zealand On How To Treat Minorities

However, this illusion was shattered on Friday when an Improvised Explosive Device (IED) blew-up in Quetta’s busy Hazaraganji market claiming the lives of 20 innocent people and injuring 48 others.

Once again, soul-breaking images of destitute survivors and wailing families are coming out of Quetta after the Hazaraganji blast, reminding us, the people of Pakistan that we have failed to protect our own.

One can launch into a series of criticisms on past and present governments for failing to effectively implement the National Action Pan (NAP) that had been chalked-out many moons ago to counter security threats within the country. However, instead of nit-picking on the state’s security failures, I want to take a moment and talk about the collective failure of the Pakistani conscious.

While we saw Pakistan unanimously raising its voice against the terror attack led by a white supremacist in New Zealand recently, there seems to be an acute lack of consensus now that terror has struck on our own soil.

Suddenly, Pakistan seems divided on the lines of sect and ethnicity. Instead of uniting as a single front to mourn and honour the fallen, Pakistanis are instead ferociously arguing among themselves about the “label” that the heinous act of terror should be given.

The small, religo-ethnic community of Hazara shias in Pakistan – that has lost hundreds of men, women and children to target killings and coordinated terror attacks in the last decade – feels that there is a genocide underway.

With less than a million Pakistanis identifying as Hazara Shia and given the staggering statistics of massive targeted terror attacks on this minority group, it is hard to contest their angry chants of genocide.

However, there are many among us, who would rather use their words to attack the bereaved than offer condolence.

As a Pakistani, a Muslim and as a human being what I completely fail to understand is the wisdom and value of schooling the broken on the correct use of jargon in the face of a national tragedy!

Can we for once not push our conscious so far back that it becomes impossible for us to respect the pain of those whose – once – happy households have been shattered by a catastrophe that we, living in our insulated comfort zones cannot begin to imagine?

Can the unaffected please take a break from preaching nationalism to those who remain vulnerable at the frontline of a war that they did not ask for?

Nationalism Lies in Loving Our Own

In this moment of tragedy, if there is one way to demonstrate nationalism, it is by standing firm beside those who mourn.

Indulging in futile wars of divergent narratives will only further weaken a nation that stands dearly divided on so many fronts already.

Pakistan does not need the misguided zeal of splintered factions. More than anything else, Pakistan needs unconditional love and empathy for its wounded hearts to heal.

Instead of further dividing a country that is already divided so starkly on the lines of ethnicity, language and religion, take a step back from the hatred to appreciate that a divided Pakistan can possibly serve no national interest.

So, in this moment of tribulation, instead of mindlessly shaming the victims for using the word, “genocide,” – if you’re among the unaffected – say a little prayer for those who once again sit under the open sky, braving Quetta’s unkind chill to demand an end to their darkest hour.